There is something wildly elegant about these song interpretations by Melbreeze. Listening to her one is convinced that she doesn’t sing each song so much as she appears to set them free. Each of the songs – particularly the emotions contained within the lyrics and the narratives feel as if they were wrested from the music in which they were trapped and allowed to flutter their wings – sometimes in a frenzy and at other times in the gentle flapping of feathers as they take wing. 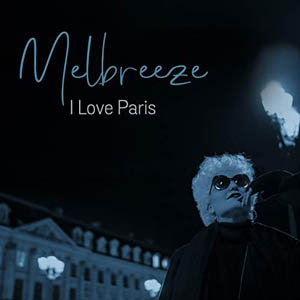 But make no mistake there is also something else at work in the music of the album I Love Paris. Not only do these songs speak in a special way to Melbreeze, but she also makes them her own by deploying her special brand of alluringly reckless vocalastics in a way that no one else has ever thought to do before. She adds words descriptive of what the feeling of the songs communicate to her – often this may be a word that will make you catch your breath and whisper to yourself: “Did I really hear her sing that?!” But wonder no more because it is just Melbreeze “feeling” the essence of the song, digging into the emotion of the word, or phrase, and rendering it with bravura that is all her own.

I am going to go out on a limb and suggest that the spiced tinsel-duct has been generously sprinkled in so many concoctions of these familiar works that to single out even one of them for attention would give the whole game away. So to preserve the delightful surprise, I will suggest that you give the disc a whirl and fall prey to the charms of the dusky allure of a special kind of artist. Be prepared for be wowed, however, even by songs that are commonly associated with the sound of surprise – such as in the great Oscar Brown Jr’s [and Bobby Timmons’] “Dat Dere” – and to feel a special kind of chill when you listen to Melbreeze’s rendition of “My Funny Valentine”, a song forever associated by some [like me] with what Matt Damon brought to it in the lurid and sinister and noir elegance of Patricia Highsmith’s The Talented Mr Ripley.