Home Music Meanwhile in Hungary… Mihály Borbély and Áron Tálas
While the world-and-wife has been shining a light on “the ECM Sound” many wonderful things have been happening in what that we – somewhat lazily – refer to as “Eastern Europe”. The Lithuanian label NoBusiness Records, for instance, has been making waves for several years and just released three discs of previously unheard music by Sam Rivers. Meanwhile, in Budapest, the imprint BMC [which stands for Budapest Music Center] has been a pillar of the scene supporting, European [and other] music – as well as traditional European [and other] music performed by contemporary interpreters. BMC Records has, for years, continued to put out stellar recordings of music composed by generations of remarkable artists, and performed by even more remarkable artists. For those living in the blissful ignorance of the west, who may be given to thinking that the daring of Hungarian musicians ended with Béla Bartók, Zoltán Kodály and – most of all with György Ligeti, whose music is beyond tonality and atonality, and beyond postmodernism – the powers that be at BMC seem to be saying: “Think again…” 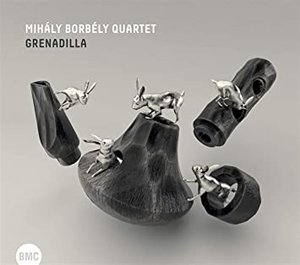 Mihály Borbély Quartet: Grenadilla New music by Hungarian musicians is daring and challenges us on every level of melody, harmony and rhythm. It is served up with sound-mass textures and dense tones, with warped polyphony, and unveiled in a diaphanous sonic fabric with fine gradations of pitch and quasi-theatrical adventure woven into the prosody, sonic narratives and pictures. All of this is made with instruments that we are familiar with and – in the case of the great Mihály Borbély – blown through traditional Balkan woodwinds as well as with those that we are more familiar with thanks to one hundred and twenty years of Jazz music. Mr Borbély’s musical adventures on Grenadilla are truly breathtaking. His quartet, comprising pianist Áron Tálas, contrabassist Balázs Horváth and drummer Hunor G Szabó [as well as Dániel Szabó, who sits in on two tracks] have internalised this with great effect.

This repertoire is an oblique tribute to the wood of the South African Grenadilla tree, the refined wood of which bestows the clarinet [and other reeds] its characteristic, deeply “woody” melodious sound. The wide arc of his creative trajectory has only a beginning; it seems suggest that it has no end – at least not in terms of his derring-do. In his works there are overt references to traditional classical [and other music, such as Jazz], often – as in “Our Favourite Things” with a decidedly Eastern European flavour, but re-contextualised in his own inimitably personal manner and often expressed in a complex harmonic conceptions and rhythmic styling in which conflicting layers of tones and tempi – such as on the briskly “walking” swing of “Grenadilla” – are used to move the music ever forward. 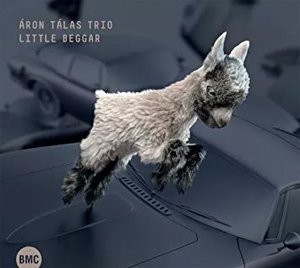 Áron Tálas Trio: Little Beggar Mr Borbély’s influence is enormous and this is clear in what his much younger pianist Áron Tálas gets out of being in his [Mr Borbély’s] quartet and which is then carried forward into Mr Tálas’ own trio, which also includes contrabassist József Barcza Horváth and drummer Attila Gyárfás. Mr Tálas’ pianism is essentially rhythmic and the effect of this overflows into his harmonic conceptions as well. The pianist’s work also generates an irresistible verve out of their endlessly colliding cross-rhythms and jauntingly-swung melodies. As the repertoire of Little Beggar unfolds we are reminded of a kind of musical jigsaw puzzle, flushed with fragmentary and stuttering utterances which freewheel endlessly before freewheeling into a distinct form bursting with a characteristic atomic energy.

The music of “Ke-Bop” and “Chicken Run” are typical of this sonic dynamism. Other pieces [“Epigramma”, for instance] are founded on complex, stuttering interplays of different rhythm and tempi. Still others [“Big Talk”] are furious, with conflicting rhythmic layers emerging out of a flurry of notes. “Weighted Words” is more reflective, which is an atmospheric template that the pianist picks up again on “Epigramma” where the trio uses triadic overlapping tempi to conjure up a mistily impressionistic veil of sound. This is breathtaking repertoire; a marvelous union of poetry and technique, at once beautifully evocative and utterly original.