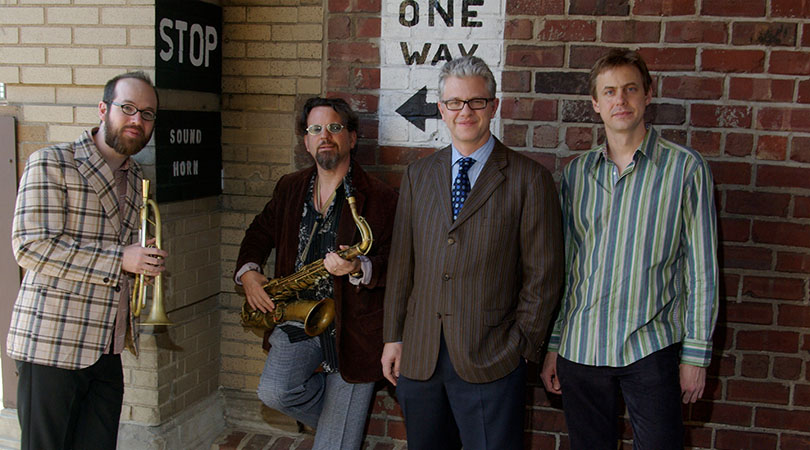 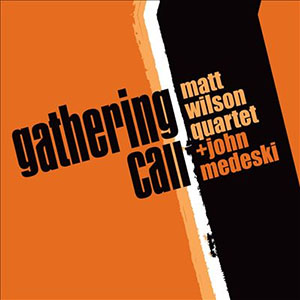 Not everyone plays drums like Matt Wilson. Coming from a long line that owes much to “Papa Jo” Jones and Elvin Jones, Mr. Wilson is as much a cerebral musician as he is a very physical player. His shoulders heave as if they were drawing principally engaged in drawing in air for his lungs; his arms, on the other hand, work with minimal motion and yet they can be involved in the most complicated polyrhythms, played with primordial and visceral energy. His occasional grimaces are mixed in with gnarly smiles and whoops as he seems lost in what he is doing. However he suddenly snaps out of what seems to be a hypnotic state centred only on his polyrhythms and then he grunts and growls as he sings off key and urges his soloists to push the envelope harder. His soli are the epitome of craftsmanship. Here he seems to be sitting astride a potters’ wheel swaying and heaving as he shapes the soli as if from lumps of clay defined with a thump of his bass drum. Then his body sways delightfully and a startling form emerges, shaped by hands that curve and slash at cymbals, and wallop and thunder as the solo progresses.

Therefore it should come as no surprise that he should assemble a quartet in like manner; and throw down a gauntlet to each musician to play music that is emotionally charged and melodically and harmonically transcendent, as well as rhythmically complex. The album Gathering Call is replete with standards by Duke Ellington and originals by Mr. Wilson along with several honorable mentions, such as Butch Warren. Played in the inner sanctum of the recording studio, they may as well have been played live. There is a wonderful quality of reaching outwards with the music, as if the quartet were playing for a live audience. The bounce and verve of the music is pitched as if to an invisible audience, which seems to respond in kind. There is a suggestion that the musicians have freed themselves from the stress of playing challenging music and are enjoying doing what they do. Soli by the wondrously bombastic Kirk Knuffke on cornet are absorbing and seem to suit the compositions by Mr. Ellington, such as “Main Stem” and “You Dirty Dog” as much as they do Mr. Wilson’s more contemporary ones. Saxophonist, Jeff Lederer is just as endearing, honking and howling with unabashed glory on “Dancing Waters” and “Get Over, Get Off And Get On.” And bassist Chris Lightcap plays with melodicism and majesty throughout.

Pianist John Medeski lights up the album song after song. His energy is palpable and it is largely Mr. Medeski that drives the music forward and upward. Following Mr. Lightcap into Butch Warren’s chart, “Barak Obama” Mr. Medeski crafts a superb solo full of ethereal twists and turns as the music seeks to paint a portrait of one of the most fascinating personalities of the 21st Century. John Medeski also shares a rather special relationship with Matt Wilson. It might seem that the drummer has a penchant for pianists, but this is not the case, although Mr. Medeski and Mr. Wilson get along just fine on Duke Ellington’s “You Dirty Dog.” The pianist also lights up “Hope (For The Cause),” “Dreamscape” and the standard, “Juanita” as if he were caressing his keys as he animated each one of them. For these and other reasons mentioned above this recording is likely to endure for some length of time to come.

Track List: Main Stem; Some Assembly Required; Dancing Waters; Get Over, Get Off And Get On; Barack Obama; Gathering Call; You Dirty Dog; Hope (For The Cause); Dreamscape; How Ya Going?; If I Were A Boy; Pumpkin’s Delight; Juanita.

About the Matt Wilson Quartet

In 1996 I started the Matt Wilson Quartet and my dream to have a working jazz band has been realized. Since that time we have delighted audiences throughout the world with our acclaimed recordings and exciting live performances. The guys in the band are not only extraordinary musicians but wonderful human beings who love to have a good time! They bring the music I compose and gather to life and make every performance memorable!

In our travels around the US, Europe and Australia*, we have played many nights of thrilling music, made a lot of friends, shared delicious food and drink, and have seen some breathtaking sights. We have also had the opportunity to expose thousands of students to improvisational music with our innovative educational workshops. We love interacting with the students and are looking forward to playing our MWQ plus big band charts more in the future.(they rock, the kids will love ‘em!)

The Matt Wilson Quartet is dedicated to bringing the music to the people. We perform music that is not afraid to challenge AND entertain. We have fun and so will you! New York based drummer and Grammy nominee Matt Wilson is one of todays most celebrated jazz artists. He is universally recognized for his musical and melodic drumming style as well as being a gifted composer, bandleader, producer, and teaching artist. Matt’s positive energy, sense of humor and ability to explore a broad range of musical settings keeps him in constant demand. In addition, Wilson’s dedication to jazz has helped establish him as a beloved world ambassador for the music, on and off the bandstand. Recently, Matt performed at the White House as part of an all-star jazz group for a State Dinner concert hosted by President Obama. Other performers included Herbie Hancock, Dee Dee Bridgewater, Dianne Reeves, Chris Botti, Randy Brecker, Antonio Hart and James Genus. Matt was named the artist in residence at the Litchfield Jazz Festival where he conducted a much-heralded public interview with Dave Brubeck. In 2010, Wilson conducted over 250 outreach programs promoting jazz including an acclaimed Jazz for Young Peoples concert at Jazz at Lincoln Center.

Matt was featured on the covers of both Downbeat and JazzTimes magazines in November 2009 and was for 5 consecutive years voted #1 Rising Star Drummer in the Downbeat Critic’s Poll. The readers of JazzTimes recently chose him as one of the top 4 drummers in the 2010 Readers Poll. In 2003, he was voted Drummer of the Year by the Jazz Journalists Association.
Matt resides in Baldwin, NY with his wife Felicia, daughter Audrey and triplet sons Henry, Max and Ethan.