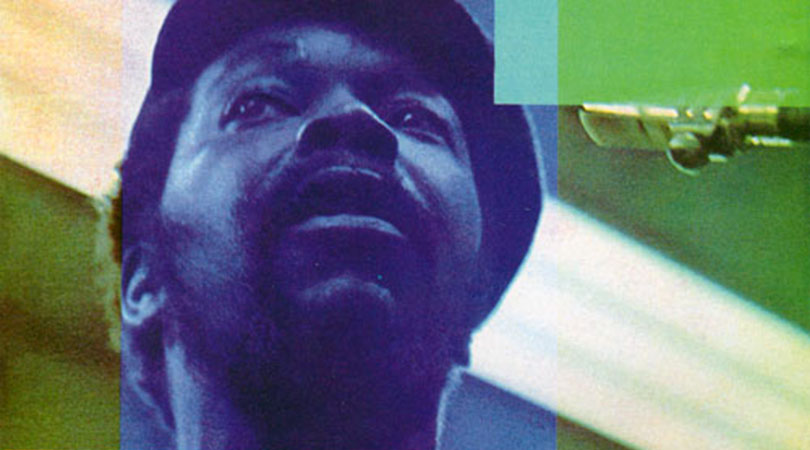 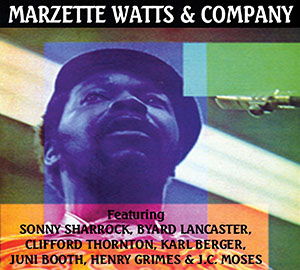 There is something distinctive about the music of Marzette Watts. The fact that he is a painter and an activist first and a musician next must have something to do with it. It takes but one listening of his path-breaking album Marzette Watts & Company and it becomes patently clear that here is a musician gifted in both the aural and spectrally visual nature of music. In other words, Mr. Watts could paint pictures as he set aspects of his experiences to music. More than almost anyone in the revolutionary era of the 1960s, Mr. Watts used colour—but more than that—he wrought tones like a colourist seeking and finding a myriad ways to extract shades and hues the sound he was hearing. And here he was so detailed that the same note could have a myriad of colours, just by shading it differently in context and in the way the harmony entered the mix, changing ever so subtly the shade of a note. This is why he played slowly and allowed notes to penetrate deep into his own psyche and that of the musicians sharing the experience with him. Mr. Watts had also found hidden timbre in the instruments and he coaxed them out as if he came to know this in an almost mystical way.

On this recording Marzette Watts teams up with Byard Lancaster to share the realm of the saxophone. Then adding trombonist and cornet player Clifford Thornton to lay his harmonies across the slanted saxophone melodies and counterpoint, Mr. Watts magnifies the timbre of woodwinds; and when the saxophonists switch to bass clarinet, they add gravitas to the already erudite music. The presence of Sonny Sharrock, whose work in many respects anticipated what Jimi Hendrix would do later, adds a huge amount of visceral energy. This could have spun out of control were it not for the becalming nature of Karl Berger’s vibraphone—trippy, spectral and seeming to come out of that fourth dimension from where Marzette Watts’ music is always threatening to come. Mr. Watts is not spiritual so much as he is magical. In this regard his music seems to burst forth from sprites and dryads; the other-worldly nature fuelled not only by Mr. Berger, but also Henry Grimes and Juni Booth who use the dimly lit arco playing almost from the shadows to add mystery and magic to the music. Both “la” and “Geno” are wonderful testaments to this the spectral nature of the music.

“Backdrop for Urban Revolution” is quite another matter. This is an ambitious canvas quite unlike any that Mr. Watts conceived and played possibly throughout his short lived career. It is suggested that it might take more than merely the African American to participate in this “Urban” revolution. It seems that Mr. Watts was asking that all of America be revolutionised: this is why the music has elements of jazz and blues, country and western. The music was meant to revolutionise all manner of bigotry. To set music as varied as what he did in this chart might have been path-breaking for its day. But then Marzette was a true revolutionary and conceived of things on a grander scale than most. He also “heard” the silence of music better than most. This accounts for his acute sense of space. This is a marvelous record and ought to be enshrined in a place where historic recording are not only stored but listened to and taught for others to have a sense of history that the men and women of the 60’s created.

Should anyone doubt the close connection between American free jazz and the rise of radical black politics in the Sixties they only need to look to the life of saxophonist Marzette Watts. However Watts — who died in early ’98 a week short of his 50th birthday — gets barely a footnote in any jazz histories. His name is usually just as part of a list which includes Ornette Coleman, Marion Brown, Henry Grimes and so on. Even his friend , the poet/writer and activist Le Roi Jones (Amiri Baraka) didn’t mention him in his 1967 book of essays Black Music. At the time Watts was recording for Bernard Stollman’s fledgling ESP-Disk and laid down his album in one day in late ’66.

Most consider the free jazz/revolutionary politics junction to have arrived in the mid to late Sixties, notably with the Art Ensemble of Chicago, New York’s Revolutionary Ensemble, and players such as Archie Shepp, Cecil Tayor, Albert Ayler and others. But Watts — from Montgomery, Alabama — was attuned to black politics, identification and activism from an early age. In college in his late teens he was a founding member of the SNCC (Students Non-Violent Coordinating Committee which morphed into a more vigorous form of activism under Stokely Carmichael) which put him in the vanguard of the civil rights movement shortly after Rosa Parks refused to give up her seat on that Montgomery bus and Martin Luther King lead the bus boycott. In 1960 Watts — not yet a musician although he had played a little piano — moved to New York, lived in the same building as Jones/Baraka with whom he founded the Organization of Young Men, then moved to Paris in ’62 to study painting at the Sorbonne (later in the decade the centre of French revolutionary student movements) where he started playing sax to earn some ready cash. Quite when Watts began to take the music more seriously — when he returned to New York a year later he was still determined to be a painter — is unclear. But he certainly began studying under trumpeter Don Cherry and jammed with those in the frontline of the free jazz movement like bassist Henry Grimes and drummer J.C Moses (Both of whom appear on his self-titled ESP-Disk album).

His New York loft become a focal point for the likes of Coleman (by then broke and finding it hard to get work despite his innovative albums), Cecil Taylor, Cherry, Shepp and Pharoah Sanders. Given that illustrious company it seems increasingly strange that Watts so should be so marginalised and overlooked today. But even at this time he was still looking to a career in painting and it wasn’t until ’65 when — after disillusionment with the art world which rejected his abstract expressionism and skin colour — that he turned to saxophone more seriously, relocated to Denmark to study, then came back to New York to record that album for ESP-Disk, which has now been given a long overdue reissue. The album session had — alongside Watts on tenor, soprano and bass clarinet, Grimes and Moses — Byard Lancaster (alto, flute, bass clarinet), guitarist Sonny Sharrock, Clifford Thompson (trombone, cornet), bassist Juni Booth and vibes player Karl Berger.

Astute observers will note the paralleling to some extent of Ornette Coleman’s double-quintet line-up from Free Jazz, but also the inclusion of Sharrock, an incendiary player whose staccato firepower would go on to become a cornerstone of many free jazz albums. That black politics was in the forefront of Watts’ thinking is evidenced by the 20 minute Backdrop for Urban Revolution, an occasionally explosive piece — especially when Sharrock starts tossing out shards of sounds which sound like storefront windows breaking. Jazz at this time — free jazz that is — was four years on from Max Roach and Abbey Lincoln’s We Insist: The Freedom Now Suite which came in a cover showing a sit-in at a segregated Southern lunch counter. Around this time Archie Shepp said, “Some of us are more bitter about the way things are going. We are only an extension of that entire civil rights-Black Muslim nationalist movement that is taking place in America. That is fundamental to music”. Malcolm X frequently spoke of the black jazz musician’s ability to improvise as analogous to his ability to think laterally in politics. In mid ’64 he said, “The white musician can jam if he’s got some sheet music in front of him. He can jam on somethng that he’s heard jammed before. But that black musician, he picks up his horn and starts blowing some sounds that he never thought of before. He improvises, he creates, it comes from within. “It’s soul; it’s that soul music. It’s the only area on the American scene where the black man has been free to create. And he has mastered it.”

It’s worth noting however that most free and mainstream jazz musicians might not have made such a color demarcation. Most bands were integrated, and Watts had German-born Berger in his band for this album. In his collection Cats of Any Colour the critic Gene Lees addresses the race issue in the essay Jazz Black and White and cites any number of black artists dismissing colour as a dividing line. But this music was about black identity because that was the tenor of the times and the issue facing those — black and white — who were making it. Three days before he was assassinated in February ’65, Malcolm X told students at Columbia, “We are living in an era of revolution, and the revolt of the American Negro is part of the rebellion against the oppression and colonialism which has characterised this era . . .” The time was right for violent revolution . . . This was the Backdrop for Urban Revolution. That is the world in whch Watts and Company — as they were credited on the cover — created his sole album for ESP-Disk. And after that he moved briefly to Savoy although much of it went unreleased for a decade. By that time Watts had moved into teaching at universities in the US and Europe, and finally ended up in Nashville where he died of heart failure. His legacy is small, but significant. As much for what it says in musical terms as it tells about the era in which it was created.