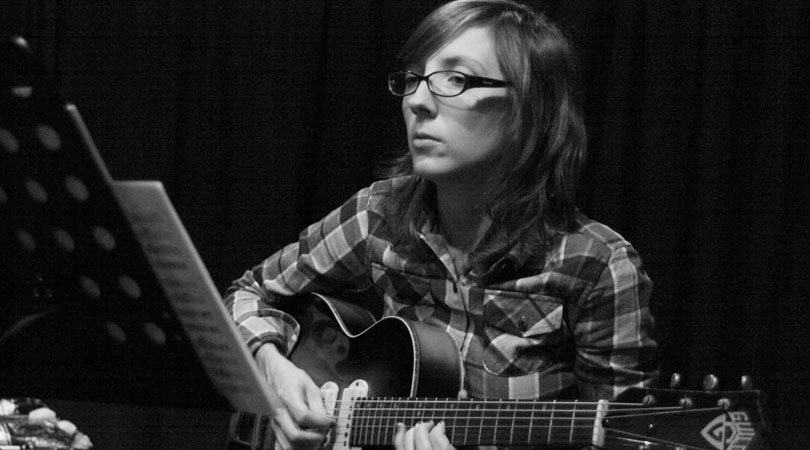 If there is one guitarist who epitomizes being on the cutting edge of improvisation of that instrument it is certainly Mary Halvorson. She combines the dry humour of Fred Frith with her own; brazen sonic forays of Philip Glass with her own; probing, darting and stabbing of melodies as Miles Davis did with the same incisive jabs at music as her own so that when she comes up for air, having made her extraordinary musical statements she does this in a voice so uniquely her own that there is nothing but Mary Halvorson in her music. Similarly the music is never the same after she has glided across its melodies, added her own inventive harmonies and intervallic flights of fancy and taken such liberties with rhythm as to make her work wholly new. Ms. Halvorson’s music is quite magical. Her unusual decision to quote and develop lines and patterns from a myriad of musical idioms imparts a sense of freshness, energy and drive to her music. Of equal importance, perhaps, is the way Ms. Halvorson plays around with standard formal principles. This kind of melding of two disparate forms in her music makes it all quite daring and spectacular in one svelte form. 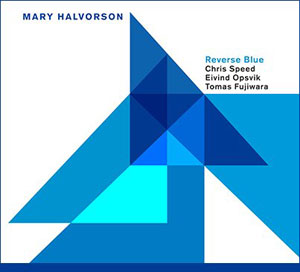 The music on Reverse Blue begins with “Torturer’s Reverse Delight,” an abridged sort of sonata form with a slow opening characterised by rising and falling lines played in a three-way counterpoint with the horn of Chris Speed and the bass of Eivind Opsvik. This and the following chart, “Reverse Blue” contain dramatic inversions and their eminent daring soon melts into “Rebel’s Revue” which is rhythmically charged. And “Hako” is profoundly melancholic. The darkly mischievous “Ego Man” follows the first few charts in a spare, reverse scherzo-like in tone featuring the interplay between Ms. Halvorson and Chris Speed and concludes in rising intensity with a lengthy melody-heavy and almost Mahlerian and monumental statement that swells and then falls in vivid fashion. Ms. Halvorson contributes much to musical composition and hers is music that accentuates the belief that this guitarist will risk her life for every note she plays in a variety of shapes and forms. Little more than half of these compositions have been contributed by Ms. Halvorson, with the others being contributed by Chris Speed, Eivind Opsvik and Tomas Fujiwara. One of the most interesting performances is on “Really OK” a waltz that features some of the best playing by all musicians on this album. The music appears to be angularly based on the changes of “Giant Steps” and it has a theatricality of its own.

Here is a recording full of hidden levels the more it is heard. Details emerge in melody, harmony and rhythms that are wonderful and do much to reinforce the view that this is one of the most interesting bands today. And this recording will remain a sentinel of its ingenuity for the players have produced music that is highly focussed and expressively articulated. The rhythmic edges are sharper and the melodic contours smoother, which make the harmonic progressions and inversions all the more beguiling and inviting. This record is highly recommended.

One of improvised music’s most in-demand guitarists, Mary Halvorson has been active in New York since 2002, following jazz studies at Wesleyan University and the New School. Critics have called her “a singular talent” (Lloyd Sachs, JazzTimes), ”NYC’s least-predictable improviser” (Howard Mandel, City Arts), “one of the most exciting and original guitarists in jazz—or otherwise” (Steve Dollar, Wall Street Journal), and “one of today’s most formidable bandleaders” (Francis Davis, Village Voice). The Philadelphia City Paper‘s Shaun Brady adds, “Halvorson has been steadily reshaping the sound of jazz guitar in recent years with her elastic, sometimes-fluid, sometimes-shredding, wholly unique style.” Read more…