The word cyclic can be used in many contexts. In its most mundane [for want of a better word] form it could be deemed an event occurring in repeated cycles. In the case of Cyclic Journey – this album by the accomplished trombonist Marshall Gilkes – it suggests at the outset “music containing a recurrent theme or motif.” However, Mr Gilkes, being an artist – composer and performer – full of proverbial surprises, has clearly imbued the term cyclic and this music with things extra-artistic, in the realm of the alchemical: 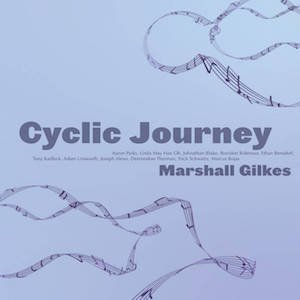 Here too Mr Gilkes provides an interesting twist for when used in the field of “chemistry”, the term refers to matter arranged in a ring – that is, organic compounds that are composed of a closed ring of atoms. This is only partially the case because if the musical notes of Mr Gilkes’ Cyclic Journey can be compared to the atoms in an organic compound [what a precious thought!] they are far from bound by a closed ring. In fact of the trajectory of notes that fly off the paper, at the hands of this brass ensemble [+rhythm section] has been freed to interact with altogether magical results. And this is to those who understand the magical bonding of organic elements in an organic compound – in a myriad of permutations and combinations – a thing of uncommon beauty.

So, whether viewed as musician or alchemist Mr Gilkes has turned out – as John Keats would have put it in his inimitable poetry – a thing of beauty… [that] is joy forever. Not only does the music bring the worlds of the programmatic or through-composed and the improvised together in an apparent mystical wonder of seamless engineering, but the intensity of feeling that lies at the heart and soul of this extended work come to life in the sheer poetry of its dark to light narrative.

In symphonic situations, brass and woodwinds usually combine even when an instrumentalist from one section is playing a cadenza or soloing. But because no woodwinds are employed here, Mr Gilkes uses all of his ingenuity to make a myriad of colours and tone-textures to collide. The effect is quite breathtaking as the various brass elements from trumpet and flugelhorn to the [darker] realms of bass trombone and tuba combine, often redolent in the hues of the euphonium. Nowhere is this better expressed than in the movements entitled The Calm, Go Get It! and [more so] in Genre Battles. Through it all Mr Gilkes often emerges in the limelight making his solo statements sing with eloquent nobility.

Mr Gilkes’ arrangements in which the full complement of musicians, including piano, bass and drums come together always take the music in surprising directions – more extrovert and playful, and altogether idiomatically more beautiful than ever. This speaks to the brilliant performance and sheer conviction of each of the musicians, who are- all of them – authentic and utterly convincing, even by musicians who may be more outward-bound by any standards. This is why you’ll want to return to this music several times; even then you will surely not tire of it – it’s that full of endless surprise.