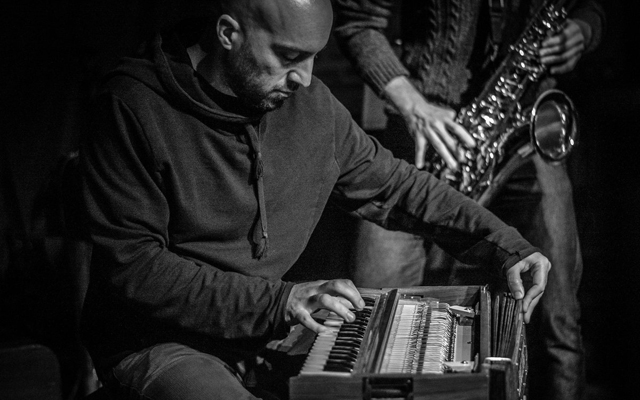 We are fortunate indeed that a pianist of considerable individuality and creativity has brought us Cómo Desaparecer Completamente, a two-disc recording of the music of Radiohead, going a long way towards approximating the sort of improvisatory approach that the band itself might favour, or at least that’s how it would seem given the evidence of Radiohead’s own studio recordings. I am referring, of course, to the Argentinean, Marco Sanguinetti. This 2016 studio performance follows three other performances – including one in concert, entitled El Otro, (The Other) (Acqua Records, 2011), on which he played versions of the music of Spinetta, Peter Gabriel and Radiohead – which also included a much celebrated one Los Processos de Franz, (The Processes of Franz) (Acqua Records, 2008), a complete re-discovery of the piano and pianism, and a not-so-oblique reference to the pianist genius of Liszt. His breathtaking 2013 recording 8 (Acqua Records) was a Bartok-like exploration of Argentinean folk forms.

One felt that the phenomenal beauty of 8 would be difficult to replicate. Perhaps that was the reason for a 3-year hiatus for Marco Sanguinetti. He has certainly roared back with Cómo Desaparecer Completamente. Right from the first track on Disc 1, “Weird Fishes/Arpeggi”, you encounter a very original approach, with markedly modern (and not so deviant) appoggiaturas and a clipped staccato, quite unlike anything – even what Radiohead do in their music. Of course Sanguinetti also draws from the deeply felt existential angst of Radiohead’s music not only maintaining its intensity but often heightening the emotions, which he pulls off with special beauty through the high and lonesome ululations on the harmonium. “I Might Be Wrong” is an extraordinary example from Disc 1 as is “Burn the Witch” on Disc 2. Despite a high-risk experimentation throughout, you would be hard-pressed to fault anything in this performance. On the contrary, the tracks are miniature masterpieces, all of them, comparable with anything that, say Misha Mengelberg, did with the music of Herbie Nichols on Change of Season.

Much of the extraordinary pianism of Marco Sanguinetti comes from his sensitive touch and tonal imagination, a high point of which can be heard on “How to Disappear Completely”, from Disc 2, with its slowly accelerating repeated notes and melancholy cimbalom-style runs towards either the treble or the bass. Meanwhile “Black Star” from Disc 1a sense of profoundly elegiac musing. The relentlessly driving “Scatterbrain”, also from Disc 1 is performed with considerable freedom and flexibility just as “Airbag” is a sort of merciless onslaught. But for me the disc’s highlights are “Nude” and “Idioteque”, both from Disc 2, not only for their audacious sense of experimentation but also for the erotic tone colours and tart, folk-like rhythms, smartly aided and abetted by drummer Tomás Babjaczuk, who also does likewise on “Everything in its Right Place”. As always Marco Sanguinetti homes in on his ‘improvisational’ elements, while continuing to add metaphorical phrases together with Pablo Butelman on guitar.

This is a fine programme overall with much to recommend it. Do also keep an ear out for Migma (Miguel Masllorens) on turntable on “Scatterbrain” (Disc 1) and the ineffably beautiful voice of Milena L’Argentiere on “Motion Picture Soundtrack” at the end of Disc 1 and then again on “How to Disappear Completely” on Disc 2.