Home Music Marc Copland: Nightfall
Spending the hour or so with Marc Copland on Nightfall is like a slow dance with genius. If the facsimile of Van Gogh’s Starry night over the Rhône on the cover doesn’t already give the game away, then Mr. Copland’s star turn on the opener, Scott LaFaro’s gorgeous piece “Jade Visions” seals the deal at the very outset of the music. It is a masterpiece of mood and atmosphere and this and the rest of the repertoire in his lonely pursuit at the piano, Mr. Copland shows himself to be able to coordinate colour and structure to a rare degree.

This is no ordinary solo piano record. It is an extraordinary recital where sublime pianism is applied to grand and spacious compositions, each of which take us unexpectedly into another world. At its highest point, Mr. Copland’s “Nightfall” it is most dazzling, 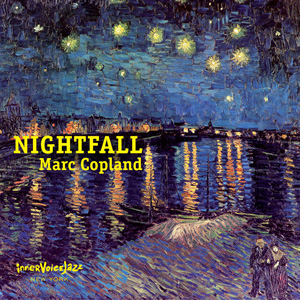 with its apparently effortless distinction between the many filigree lines and the song’s aristocratic elegance and a veritable spume of champagne fizz and finesse.

At its heart Nightfall is crepuscular, full of glinting lights, mysterious depths doubts, hopes and expectations, like the dancing shadows of an evocative Mendelssohnian Scherzo, glimpsed by moonlight in a forest. But it is also remarkable in sheer colour and variety, in the depth of the music’s characterisation and the exceptional range and refinement of its pianism. It is a work of a musician and pianist who makes his instrument live and breathe, and make the black dots leap off the paper.

Also utterly unforgettable is the manner in which Mr. Copland brings effortless Chopinesque urbanity and lyricism to Ralph Towner’s “Song for a Friend”, Gary Peacock’s “Vignette” and the two John Abercrombie charts, “Another Ralph’s” and “Greenstreet”. Meanwhile his performances on his own writing that rustles like raw silk. Here he is most seductive and persuasive, and provides an object lesson in the very essence of style.

For sheer poetry of feeling, one would be hard-pressed to find anything comparable. Marc Copland hits it out of the park with these eight pieces. Each is played with buoyant, aristocratic grace and psychological ambiguity, and almost effortless, ravishing virtuosity and debonair swagger.