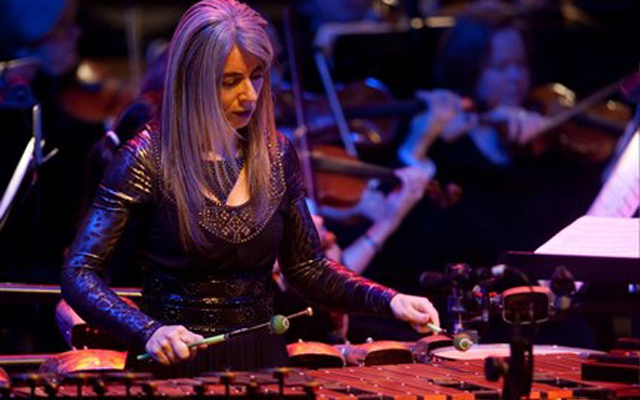 It has been said that artistic genius is “something that cannot be explained”. This, indeed, is its very defining characteristic. Those who live with it are unable to reveal its secrets. Absorbed by its contradictions, ill at ease in the real world, alarmed by their uniqueness blinded by a truth that common mortals can only dimly perceive and swept along by a force that is beyond them, geniuses play like children. Baudelaire made no mistake when he wrote that “genius is no more than childhood recaptured at will”.

He may have well been speaking of Dame Evelyn Glennie, who like Cziffra, Horowitz, Charlie Parker, Jimi Hendrix or Martha Argerich, belongs to the breed of performers of genius who have an elemental rapport with their instrument. In Dame Evelyn’s case her rapport extends to anything that can be beaten, whether in tune or out of tune. When she plays percussion instrument – the marimba and vibraphone in the case of this recording, 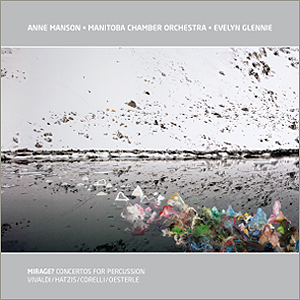 Mirage? Concertos for Percussion – it is no longer a percussion instrument; it is a piano, a violin, a harp, a clarinet… or she can make it a whole symphonic orchestra – thundering or whispering its melody, harmony or rhythm; it all depends on what she happens to be hearing inside of it.

In the performance of these four short works composers from the baroque to the modern era Dame Evelyn is in her natural element playing the music of Vivaldi, Corelli, Hatzis and Oesterle, plunging fingers and hands into the wooden bars of the marimba, or the metal ones of the vibraphone, ever present in the music in the spirit and in the flesh. Like a man and a woman. The dexterity, electrifying virtuosity, the powerful octaves, imaginative phrasing and the hushed, almost intangible pianissimos, come together with her own inner voices and imbue the music with a life of its own, swathed in the resonant richness of sound that is immediately recognizable a being the voice of the composer as well as her own singular one.

Through Dame Evelyn’s fluid phrasing – in both the allegro and allegro molto movements of “Piccolo” – and in the profundity of her performance through the depths of the largo movement one is struck by the colossal riches at the heart of this concerto. Meanwhile the Manitoba Chamber Orchestra under the baton of Anne Manson provides fresh and vigorous and command performance, propelling the soloist to the pinnacle of this work.

The Corelli is chaste and faultless throughout. The intrepid Karl Jenkins’ arrangement of “La Folia” is played with obsessive perfectionism and dizzying, idiomatic brilliance throughout. Dame Evelyn together with the members of the Manitoba Chamber Orchestra and Miss Manson come together to parley with the familiarity of old friends, yet their playing – especially that of the soloist – retains that sense off gracious etiquette associated with Latin tradition from where inspiration was taken by Corelli.

In both the contemporary works by Hatzis and Oesterle, again Dame Evelyn comes together with the ensemble, sharing the supple rhythmic flexibility of the pieces with a sense of big-boned generosity. The sense of depth and spaciousness that gives both works a big-boned, orchestral scale is affecting. Nothing is forced or overly mannered; tempos, ensemble and balance – all seem effortlessly and intuitively right. The sound is lucid, bright and redolent of the warmth of living breath. These pieces are, in sum, sincere and poised accounts, fitting tributes to the faultless character of each composer whose repertoire and reputation has been zealously guarded by these fine performances.