The title of this irresistible disc comes from the iconic song of the legendary Italian songwriter, Gino Paoli. The lyrics though beautifully suggested are not really missed thanks in large part to the utterly beautiful and husky tomes of Luciano Biondini’s reedy accordion. Further the thirteen-piece disc might easily be said to chart the future of the irrepressible joie de vivre of the accordion. Mr Biondini’s fingers splayed across the buttons of this wonderful instrument employ subtle tempo fluctuations and strategic accents that help give shape and dimension to the music’s harmonic richness. In addition Mr. Biondini’s melodic pointing and vocally oriented phrasing prevent the relentless toccata-like patterns melded into the folk elements of the music from sounding the least bit mechanical and ‘notey’, an achievement easier said than done on this instrument. 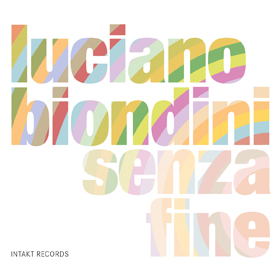 Italian music is not so much a form or an idiom as it is a texture and if you assemble some of the most memorable music from composers of that country and hear it played by one of the great players on the accordion you might run the risk that a certain sameness might prevail. Happily that’s not the case here. Once again Luciano Biondini proves his reputation as a provocative yet immensely thoughtful programme-builder. His two part invention Libero is one of those masterpieces that go a long way into making a case for Mr. Biondini as being a prime innovator on this wonderfully romantic instrument. The chart in question is so beautifully written that it is hard to any accordion player not wanting to include it in his or her repertoire; the delightful skitterings of the lively dance-like movements also make it an ideal encore, its captivating personality adding to its irresistible charm.

Charm and personality reveal themselves in how freely yet naturally and logically these musical offerings unfold. The variety of moods that this music inspires also makes for a record that is truly memorable. Sinuous melodies are dance-like and it is easy to imagine the music drawing partners together in steamy embrace on and off the dance floor. The high spirits and torrid emotions of the music that unfolds from Luciano Biondini’s accordion can be savoured in all of the pieces especially in the rhythmically zestful Geppetto as well as in the beautifully vocal and melismatic Cinema Paradiso.

The pleasures of this music can be attributed not only to Mr. Biondini’s absolute virtuosity on his instrument but also to the colourful arrangements. These are wondrous mixes of melody and harmony played by one of the foremost exponents of the accordion as well. Throughout the disc this young maestro plays with the depth of sonority and rhythmic gusto that this music demands whether it is played in a night club, concert hall, or – as is the case here – in a recording studio where Senza Fine is captured by extraordinary engineering mastery by Willy Strehler for the superb Swiss label Intakt Records.

Born in Spoleto in 1971, Luciano Biondini started studying the accordion seriously at age 10. He has been awarded many prizes for classical accordion, e.g. Trophée Mondial de l’Accordéon and Premio Internazionale di Castelfidardo. Since his turning to jazz in 1994 Biondini has played with the likes of Rabih Abou-Khalil, Dave Bargeron, Michel Godard, Battista Lena, Gabriele Mirabassi, Enrico Rava, Tony Scott and many others. A true master of his instrument and a soloist with an overwhelming dramaticism, he always adds something beautiful and original to any context he works in. Read more…