Of all the things you could do to conjure up a vision of a better, more thoughtful and joyous world the music of Louise Woolley will always surely rank close to – if not atop – any list. She is, admittedly, a young and still developing musician but her genius is palpably permanent. This 2020 album is rather diffidently entitled Rascunhos, which in English, translates as Drafts. This is a kind of poetic reticence; Moacir Santos displayed plenty of it when he called his own 1965 album Coisas [or Things. In the case of both, Mr Santos and Miss Woolley’s extraordinary music, however, shyness belies the sheer poetry of emotion ensconsed in their music. 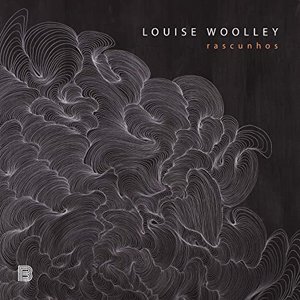 Contrary to the artistic shyness on Miss Woolley’s part, the repertoire on Rascunhos displays the kind of surefootedness that you would expect from someone three times her age and well down the road in her career as a pianist. The music is brilliantly conceived, written, orchestrated and performed by Miss Woolley and sextet [also complemented on an occasion by a vocalist] the musicians – including the gravity-defying bassist Bruno Migotto and drumming colourist Daniel De Paula – of which have deeply interiorised her music and interpret it to perfection. Miss Woolley, with her altogether exceptional playing, leads the charge from the front.

Right out of the gate, aided and abetted by the heavenly voice of Lívia Nestrovski, “Rascunhos 1” sets a meditative tone. With darkish mood and atmosphere Miss Woolley daubs the music with exquisite colour, while the horns and other instruments layer on texture and structure. We find that as the works progress, Miss Woolley’s “Rascunhos” change in mood tone and narratives. Miss Woolley takes us unexpectedly into another world – her world of glinting lights, mysterious depths, expectations, frustrations, doubts and hopes. We become rapt in this music, glimpsed, as it were, like the shadows of a Debussy-like scherzo, glimpsed at once by moonlight in a forest and later sunlight on a ridge.

In sheer colour and variety, in the depth of their chatracterisation and the exceptional range and refinement of its pianism – and orchestration – Miss Woolley here imparts a power and majestic stature to these miniatures. In their variety and stylishness of the seven “Rascunhos” and in the album’s dénouement – “Primeiro Dan” – Miss Woolley brings effortless urbanity and lyricism to this music. The orchestrations are also graced by the molten grandeur of Diego Garbin’s horns and Danilo Silva’s guitar, and are seductive as they are persuasive, with each of the members of the ensemble playing as their collective lives depended on this music.

The crowning glory comes in “Rascunhos 7”, which Miss Woolley shepherds with buoyant, aristocratic grace. Her pianism is insolently effortless [as it is also in “Primeiro Dan”, also laced with the cascading rhapsody of Jota P’s solo] where brings debonair virtuosity, swagger and ravishing suppleness to her pianism. With the joyful filigreed lines and evocative voicing here and elsewhere on this album, Miss Woolley takes her musicianship to a rarefied realm. Rascunhos is a champagne disc with ebullient fizz and uncommon finesse.