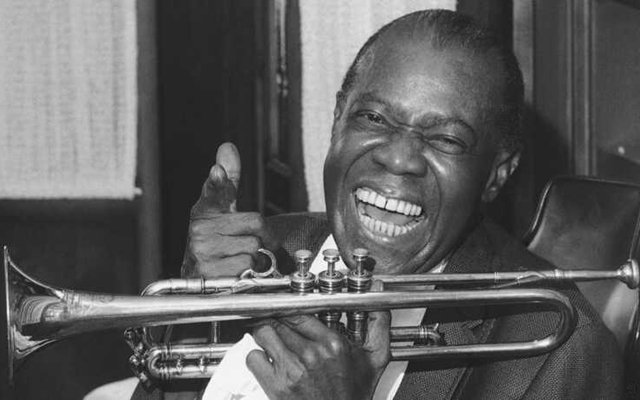 Louis Armstrong’s evangelical musical career in music began more than one hundred years ago. He dazzled hard-core Satchmo-lovers and nice ordinary people alike with each recording he made and much more so every time he appeared on stage the world over, whether he appeared with his Hot Fives and Hot Sevens. His was an evolving revolution whether it was with his small New Orleans combos or the 1920s. Through the 1930s and 1940s when he fronted big bands the gloss came off slightly and in the late 1940s he made way for the glorious Beboppers.

It was around this time (May, 1935) that Mr Armstrong came under the influence of his long-time manager, Joe Glaser who triggered the disbanding of his large ensemble and facilitated the formation of The Louis Armstrong All-Stars, the band with which he undertook several successful tours of Europe (among other continents and countries around the world). It seems that this was what everyone had been waiting for, not the least Mr Armstrong himself. This meant a return to the style of his greatest achievements; a free-wheeling format made for mutual inspiration and joy.

The Louis Armstrong All-Stars introduced a new generation of listeners to Satchmo’s genius and charisma, which shone as Mr Armstrong’s luminous swinging trumpet-playing style and razor-rasp of his vocalastics, was broadcast in tandem with Jack Teagarden’s mournful trombone, the loping lines of Earl Hines’ piano, Arvell Shaw’s poetic, melodious bass and the perky drumming of giants such as Sid Catlett and Cozy Cole.

Those men became natural peers for Satchmo – like brothers, the trumpeter said – playing and singing with shared warmth and wit. But throughout, Satchmo reigned supreme. Whether delivering melancholy Blues or effervescent Jazz standards, his musicality and power remained remarkable, making everything he touched his own, illuminating the simplest phrase. His showmanship was as natural as his musicianship; in both he reached out to his audiences and he mesmerised them.

You can hear this in the applause. And you can also hear – in everything Satchmo did – why younger musicians, even those who were sceptical of Louis the entertainer, remained in awe of Louis the master and Jazz life-force. 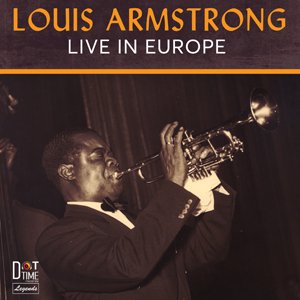 Louis Armstrong: Live in Europe This is music from the period when Louis was re-inventing himself with members of his All-Stars. The great one was in Europe, where he was – and continues to be – revered by musicians and listeners alike. Together with inimitable partners such as Jack Teagarden, Trummy Young and Barney Bigard, and with Earl Hines, Arvell Shaw, Sid Catlett and Cozy Cole, Satchmo presents his Jazz masterclass with spellbinding effect.

Every song tells a story in a memorable way. Satchmo makes you hear music inside the music. Each of the pieces develops from a beguiling, elegant melody evoking not only a memorable time when Jazz was young, but also points to the journey that will be undertaken. As ever, Satchmo’s creativity stimulates mental pictures of each narrative evoking the life of the times. It is fast-paced music in which Satchmo conveys his artistry with spellbinding effect, drawing in his wake each of the other musicians who grace these performances.

Satchmo doesn’t waste time on trying to find novel approaches – he just lets the music speak for itself with engaging elegance and wit. You will be hard-pressed to find a better version of “Royal Garden Blues” or, for that matter “On The Sunny Side of the Street’. He is positively stompin’ on “Way Down Yonder in New Orleans” – of course no one could sing and play better – especially about his beloved New Orleans. The vitality and sparkle of this music shines brightly throughout. 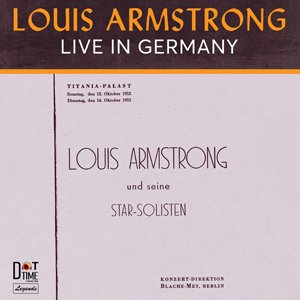 Louis Armstrong: Live in Germany Although it’s often to impossible relate to Louis Armstrong critically when he in full flight (you are just mesmerised every time he sings and plays) one facet of his performances is that he continues to restlessly challenge his core repertoire. This becomes startlingly clear when you listen carefully to this music which was recorded during the same period when the latter part of the previous disc under review was recorded – in Berlin, during the month of October, 1952.

In the US, Satchmo may have been making a recovery (in popularity, at least) among Jazz audiences who were being blinded by the blitzkrieg of Bebop. But in Europe he was still royalty – unassailably so. The sustained brilliance of his playing is evident in everything he plays – once again with Trummy Yong, Arvell Shaw, Cozy Cole, and with Velma Middleton’s endearing vocals alongside the great one on occasion

Listening to Satchmo play through this recording is like focusing on a great painting that you may have seen many times before. As you continue to look at it you discover, much to your own wonderment, remarkable new details you never knew existed. “Lover Come Back To Me” and “Kiss To Build a Dream On” are just two such moments. You also realise why he was revered as “Pops”; he was indeed a sort of father to every Jazz musician – great and small – who came after him… and now, more than a hundred years after the fact he still is.

Both these Dot Time recordings are also remarkably restored and processed and are a welcome addition to dyed-in-the-wool aficionados of the music and of the inimitable Pops.