Home Music Listening to Samo Salamon
The music of Samo Salamon can be said to exist on a knife-edge of experimentation: melodic (it’s difficult to recall when he wrote a “song”), harmonic (he never seems to cross the a sound no matter how individual, with the same superpositions of sounds), and rhythmic (pulses and beats, indeed Time itself often appears to be “sung” in free-fall on his recordings). And you would think that there’s hardly anything he’s never tried, but it’s true that one of these recordings Planets of Kei is the first recording he has made where no music was composed for the date.

Mr. Salamon is a musician who inhabits the same brave new universe of the guitar and though he has probably not travelled as far as someone like Fred Frith, for instance, his music still seems to hover in the nether world of a portal between the discordant and the harmonious. However, Mr. Salamon’s music is always accessible albeit elusive, as one would imagine, given that he is a restless journeyman, never in the same place, with the same people and seemingly alone in his search for his musical Holy Grail.

And Mr. Salamon is also relatively prolific, which may also suggest that he is full of ideas that he pursues with phrase after parabolic phrase of music that he easily disengages form the proverbial dots on staved paper, enabling them to leap into the air and pirouette in like the invisible Nijinsky and Pavlova locked in an interminable dance in the space (albeit perhaps confined) of a room with enough place to stage something dramatic. Best of all, the results – whether you agree with the methods or not – are always unforgettable, as they are here as well 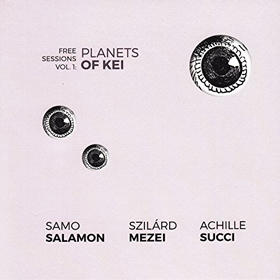 Samo Salamon: Planets of Kei There are times on this disc – especially on the trio tracks – that it is impossible to separate the instruments which are two stringed and one wind or reed instrument. More remarkably, each member of the trio – Mr. Salamon, Szilárd Mezei and Achille Succi can always be heard pushing their individual instruments to the limit of their capacity to produce sound. As a consequence – on “Trio VII”, for instance – there are moments when not only is it impossible to separate the guitar from the viola or even both those instruments from the alto saxophone as instrumental timbre is manipulated and even altered by each of the musicians almost brazenly and to very extreme degrees. On the same track, hints of Gérard Grisey, arise in music of a most quintessentially spectral nature and this is something that is carried on into the (final) “Trio Suite” as viola, acoustic guitar and bass clarinet become involved in a colossal argument towards the middle of the selection before resolving their bitter dispute in a hair-raising, ghostly and beautiful dénouement. 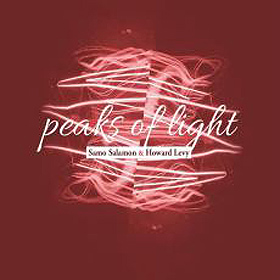 Samo Salamon & Howard Levy: Peaks of Light How do you go from a musically almost deranged set of free improvisations to a duet in which both musicians play absolutely mellifluously composed songs? Obviously if you’re Mr. Salamon, you team up with the doyen of the harmonica – Howard Levy – and create not only eleven new songs, but a centrepiece – “The Harmonica Suite” – to celebrate this union of strange bedfellows. At one end you have a peripatetic improviser on acoustic and electric guitar, engaging in extraordinary musical dialogue with a harmonica player who, with Toots Thielemans, has taken the harmonica to Himalayan heights while traversing everywhere on the musical map of styles. Predictably the results are anything but predictable. There is so much questing beauty in the angular “Chaplin Walks” which tilts this way and that as it mimics the steps of the world’s most famous and beloved comedian. “Barren” often becomes a chatty piece with Mr. Levy’s vocal-style of playing entering into an often garrulous conversation with Mr. Salamon’s guitar. “Sleepy Burja” is remarkably close to an old cowboy song that Mr. Levy decorates with some wonderful high and lonesome playing. Along the way there is more fine music but the best fun and games are reserved for “The Harmonica Suite” where both Mr. Salamon and Mr. Levy are at the peak of their powers, for combined tonal purity, shimmering intonation and phrasal intuitiveness.