Home Music Liebman Murley Quartet: Live at U of T 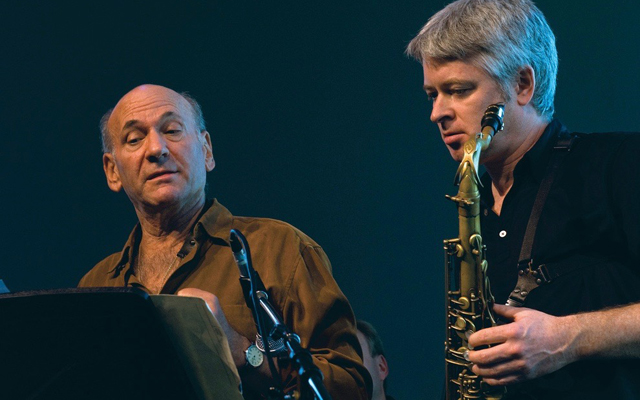 One might easily mistake where the elemental, ululating caoineadh (Gaelic for “keening, or cry”) is coming from. In many ways it is a musical version of the keening crafted in ancient times by Lord Kagrenac, Chief Tonal Architect of the Dwemer, during the First Era as he harvested the power from the Heart of Lorkhan buried under Red Mountain. Only this is not an Irish lament at all; it is Dave Liebman announcing the beginning of Jim Vivian’s Jazz tune “Split or Whole” with a rush of air forced through the reed of his soprano saxophone, inviting Mike Murley to join in the festivities with his tenor saxophone, but not before the song has first been blooded by fat notes shot out from Mr. Vivian’s bass, the blows of which are only softened by Terry Clarke’s masterful drum interjections.

Liebman Murley Quartet Live at U of T is an old-fashioned visceral blowing session between a David Liebman, one of only five living saxophonists (the others being Pharoah Sanders and Archie Shepp, Wayne Shorter and Sonny Rollins) to cut a wondrous swathe through the spiritual territory left virtually barren after John Coltrane and Albert Ayler died. The fact that he is joined by a relatively lesser-known Canadian, Mike Murley speaks to the fact 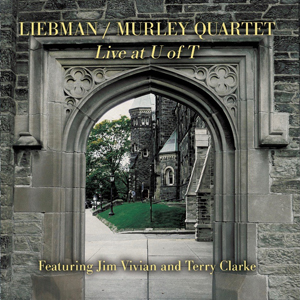 that the Canadian has got what Tom Wolfe once referred to as “the right stuff” in his iconic novel of the same name. The revolution, however, may be much quieter than the one that Chuck Yeager left on the history of space research.

But listening to Mr. Liebman and Mr. Murley “duel” – each sometimes playing tenor saxophones together – we have a timely reminder that the resulting sonic boom of Jazz is no less culturally, historically, or aesthetically significant. There might have been a time that Mr. Liebman was riding on the coat-tails of John Coltrane; some critics might have suggested that. But Listen to the roar of Mr. Liebman’s saxophone on “Off a Bird” or the gravitas of his tenor saxophone, angled against Mr. Murley’s and his (Mr. Liebman’s) own fluttering flute opening and if you do not find yourself catching your breath then you might be said to have no appreciation of the urgency of Jazz – indeed no appreciation of any kind of music – classical, popular or Jazz – whatsoever.

On that same chart you hear bassist Jim Vivian also breaking the sound barrier from his magical opening triplet to his profoundly beautiful, almost vocal solo. And you will also hear Terry Clarke’s playing, so deeply in the pocket that you will wonder no more how the great Canadian drummer came to grace one of the most iconic Jazz ensembles of the 1960’s, the John Handy Quintet which also included another Canadian legend, musical polymath, Don Thompson. The rhythmists’ star turn on Mr. Liebman’s “Nebula” and Joe Lovano’s beautiful “Blackwell’s Message” is like one of those mystical voyages that takes place in interstellar space, only on this one, the vehicle is fueled by the breath of life coming from two saxophones propelled by bass and drums.

This is record with its nine charts played by giants (not mere mortals) is a musical treasure; one to absolutely die for – for all those reasons as well as the pristine warmth of the live recording delivered by Aaron Landsberg.