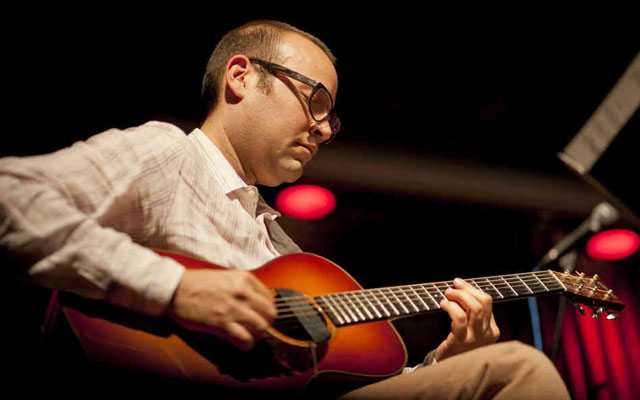 Liberty Ellman is forty-four this year and is well-placed to share the mantle (along with Mary Halvorson) of Sonny Sharrock’s pivotal role in the progressive mainstream of jazz. Like his illustrious and prolific contemporary Mr Ellman seems to have no hang-ups about confronting time-honoured vocal and instrumental genres without seriously threatening the stability of institutions – duos, trios, quartets… other ensemble combinations and indeed the whole musical industry itself – that survive through keeping long-standing traditions alive. Yet Liberty Ellman has manifestly thought long and deeply about how music communicates in modern times and the results are neither comforting nor predictable. 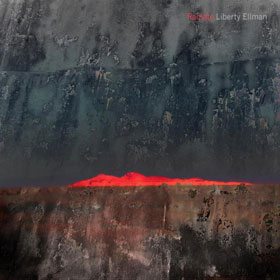 The eight works here for brass woodwinds and rhythm section is a remarkable achievement for the forty-four year old, its possible sources in the ancestors of instrumental-playing jazz ancestors (not only the guitar) and other practitioners of ‘sonorism’ put to distinctive use in a portrait (Radiate) – both impassioned and parodistic – of music’s power to hypnotise and to subvert. An album of considerable length risks seeming lightly laboured in comparison, its slant on progressive romantic lyricism skilfully sustained but leaving an equivocal sense of contention between an idealistic search for continuity and an archaic relish for distortion. In fact each of the eight pieces sound gloriously raw and gutsy as Liverty Ellman and his ensemble run them down inventively and intuitively.

All of the music on Radiate seems to have been carefully crafted and ideated, that is, and with its much more brittle material and predominantly bright, even loud colours it sounds like a deliberate countering – or, again, distortion – of the conventional song-writing premises. The addition of the brilliant avant-garde trumpeter, Jonathan Findlayson and alto saxophonist, Steve Lehman, reinforces the sense of a composer and bandleader fascinated by music that revolutionises the sound world and that offers uneasy accommodations with the past. In these and the rest of his ensemble Liberty Ellman has found suitably uncompromising interpreters, and the recordings (especially the Ionesco-like Rhinocerisms and the other absurdist piece, Skeletope) are as unvarnished and wide in perspective as the music itself demands.

Kudos to Pi Recordings for bringing this magnificent music to the discerning listener.

Liberty Ellman (born July 17, 1971, in London, England, United Kingdom) is a jazz guitarist born in London and raised in the United States, beginning in New York City. In the early 1980s, Ellman’s family moved to California. Before leaving New York, Liberty attended Greenwich Village’s progressive City and Country School. In the 1990s, Ellman was associated with the M-Base musical scene active in San Francisco, California, where he played with Eric Crystal. He also worked with hip hop artists such as the Coup and Midnight Voices Read more…