Home Music Leni Stern: 3
Logic ought to tell us that if all life and all civilisations came from Mother Africa, then so also does the impulse to “sing” and “dance” the rhythm that we hear in all music that pays her homage. When it comes to the music of this disc, 3, by Leni Stern, we don’t need logic or any other intellectually-driven impulse. We are driven to “sing” and “dance” to every breathtaking possibility simply because of what is innate in this musical homage; indeed in every sonic image that is presented here by Miss Stern, Mamadou Ba and Alioune Faye. The vitality that comes from it – this music – is awakening, like being impacted by a series of solar flares from the nuclear corona of the sun. And this musical light is so special, so enormous and so dense that it might even enable to walk through a block of concrete should such an impediment arise en route to our celebrating this music.

Just by listening to the music of 3 one experiences Miss Stern, who is completely transformed by the touch of Africa. From “Khavare” to “Calabas” and “Crocodile” the guitarist becomes an artist who even in the ordinary act of fingers on strings is able to impregnate each twang with an extraordinary note. 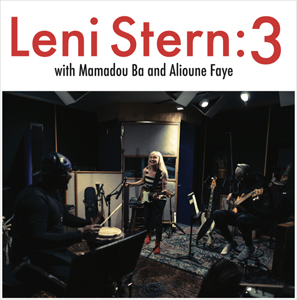 Strung together with others in a chord, a phrase or a line, Miss Stern’s music grows in intensity to become that unstoppable force that she has become. The simple phrase in “Wakama”, for instance, continents collide and a melody expands in beauty, becoming a gushing ecstasy.

Similarly, when her fingers bite into the strings again in “Calabas” shadows and shining surfaces reveal themselves. The song contains darkness but in its revelation of anti-light the flicker of synapse between us and the African sun comes into being. And we are awake and alive again in a way that is somehow different to the way we have been a moment ago. It is as if her, as everywhere else Miss Stern – through her music and in her sublime artistry – has poured energy into the air around us. We, for our part, become changed forever because of her and the message she brings from Mother Africa.