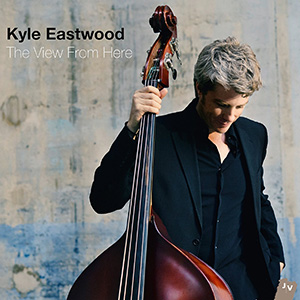 The famous name is only one part of what Kyle Eastwood brings to his art; the other three are the ingenuity of his technique on his chosen instrument, the unbridled talent for composition and the creativity of his ideas that he brings to music. All of these aspects of Mr. Eastwood are eminently discernible on the music on The View from Here, a dense record full of musical allegory; rich in allusion and even displaying a puckish sense of humour, while always remaining romantic in the purest sense of the term. It is also a record on which Mr. Eastwood maintains a great sense of reserve, rarely soloing—he leaves that to the remarkable horns: saxophonist and co-composer on many charts, Graeme Blevins and trumpeter and flugelhorn player Quentin Collins—but when the bassist does solo he does so by playing in short or long phrases with viscous notes that heat up and bubble as if they were churned in a magical cauldron buried in the heart of his acoustic and his electric bass. However, so self-effacing is his playing, that it is easy to forget that this is a bassist’s record; whose music is full of interesting twists and turns and bass line melody that leads the brass and woodwinds into territory that is rich and radiant; almost classically romantic and full of genuine sentimentality.

Whether he is playing the deliciously ravishing double bass or the sleeker and racy electric bass, Kyle Eastwood seems to have the fingers for both. Moreover his are the fingers of a pianist. His left hand is never stuck merely in the harmonic realm and even when it is, it is far from predictable. Mr. Eastwood plays with ravishing colours often turning the pieces he is interpreting into large musical canvases on which he and the other principal characters run lines that are beautiful, challenging and full of the vim and verve of elegant dancers. However, that left hand is also a melodist that refuses to be fully controlled and runs riot every once and awhile as it does in the remarkable barrage of double-stops and polyphonic gymnastics that tumble from the instrument at Mr. Eastwood’s hands on “Une Nuit Au Sénégal” a proverbial doffing of the hat to the 70s and 10cc, perhaps—and that is only on electric bass, where it might be easier to execute for one playing as he were a pianist. On “Sirocco” and “The Way Home” Mr. Eastwood repeats technical feats that only a pianist of sublime skill could on the ivories. Relocating such technique to an instrument that is vertical in aspect and whose strings must be manipulated with a dexterous left hand, while the right is running riot, melodically with an extraordinary display of feeling is advanced technique indeed.

Mr. Eastwood spends much of his time in—if not all of it—in Paris, France. He is now a Parisian in every sense of the word and as such steeped in its romantic air and the classicism of its sub-culture. He is also an itinerant traveller almost in the sense that Paul Bowles was, which is to say that Mr. Eastwood is native in Egypt as well as in Sénégal, and anywhere in the realm of Africa. He has absorbed the light and dark of that magical and mystical continent in a rich and remarkable manner and it emerges in the music that he composes, which is redolent in the colours and flavours of every corner of countries that he inhabits. The mysterious splendour of “The Promise” is one of those compositions that captures not only the romance of that country, but also does so in a manner that is deep and existential. Mr. Eastwood does get assistance from the outstanding musicians who accompany him on his musical odyssey, but it is clear who is in command of the expedition here. “Sirocco” is also wonderful— and is a composition that captures the ferocity and brutality of the hot wind and dust that blows with it—in all the glory of its dusty and colours. “Luxor” sways as if with the wind caught in the huge sail of a ship drifting downstream, with spectral music on the daf suggested by Martyn Kane’s exquisite drum set. And so on… as if this were a record that is constantly moving; hardly ever stationed in one place and time…

As with the sense of constant movement so also with the process of ideation that is woven into every piece, which makes every musical journey with Kyle Eastwood a memorable one. Nothing is obvious and predictable, and this is clear from the very onset of “From Rio to Havana”. This, for instance, is a piece cast in the journey that appears to begin in Ipanema and finds its way to the cool waters of the Caribbean sea. But none of this sounds like Bossa Nova or Samba, or Son and Danzón with predictable shuffle and delicate rumble of clave. Yet the romance of the shuffle and the rhythmic beating and sliding of Carnivalistas and of Tropicalismo in samba and the beating heart of clave is all there. And that is only the beginning. The musical cohort moves sensuously from there and never stops as the music cruise continues through rural Africa until it returns, seemingly intoxicated by the journey overseas. Thus “From Rio to Havana” is spectacularly bookended by the wonderful and drunken swagger of “Route de la Buissonne”.

It must be mentioned here that all the musicians are credited at some point on the music of this record. This musical journey is a shared one and it is obvious that the musicians are constantly sharing and exchanging ideas. And that is what makes this record so significant: that it is a shared journey, where the process of making music requires the fullest participation of its players, which is why it is resplendent in the sound of surprise.

Kyle Eastwood on the web: kyleeastwood.com