In Plato’s Republic, where life played out with honour and purpose, the artist that brought the greatest pleasure was the one “who would imitate worthy things”. While considering the mimetic aspect of art, he also went on to acknowledge that the inspiration can, indeed, give rise to the utterances of a madman, but can also be a “divine release of the soul from the yoke of custom and convention”. So many years after that ideal democracy, our own fractured geography has been ravaged by great war, the desperation of migrations and now the first pandemic in a hundred years. Naturally the mirror of life, too is fractured, so what the artist sees is a shattered world. 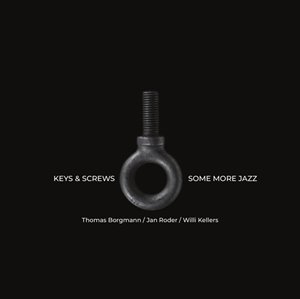 Artists like Thomas Borgmann, Jan Roder and Willi Kellers have long since exteriorised the troubled inner life of the artist, which in musical terms has meant using fractured forms and atonality to reflect this nightmare world of instability and anxiety. But by staying focused on the essential nature of human liberty while approaching life’s mirror with humour and the complete absence of guile Messer’s Borgmann, Roder and Keller continue to make raw and visceral music often seeming to have sprung into being from a point beyond the modern world, evoking human force with spare lyrical beauty and, on occasion, haunting delicacy.

This burgeoning lyricism can be felt all through the repertoire of Some More Jazz, an album that was recorded in 2017 and recently released. The music of its three pieces [one each by the saxophonist, bassist and drummer] shows the musicians of Keys & Screws to be artists of the first order, making music that comes from an increasingly sophisticated attitude to rhythm and musical time – in fact, a marriage between the pastoral and the urban/mechanical. Each of the pieces evokes the experience of being in a pulse labyrinth – a road map featuring three musical instruments propelled at some speed – which determines the routes along which the musical compositions travel through memorable and dynamic landscapes.

Throughout the repertoire each instrument is, by turns, a reappearing signpost in the ever-changing scenery, viewed [as it were] from constantly evolving perspectives of saxophone, bass and percussion. Throughout, of course, we are reminded that the musicians – while driven by the music’s visceral energy – possess sublimely lyrical gifts that also define their individual playing. A truly memorable set, captured in the beautiful warmth of this recording.