Home Music Kendra Shank & Geoffrey Keezer: Half Moon
Pitch shouldn’t – and does not – matter to Kendra Shank. The resourceful and truly inventive vocalist almost mocks the conventional modes of voice artistry on her 2016 duo disc with Geoffrey Keezer, Half Moon. Both singer and pianist pursue ideas as they unfold, beginning tentatively – as anything created out of thin air – and then increasing in drama and intensity as the cycle of creation progresses with each phrase, line and chorus. And you will hear this in ‘Alone Together’ as the duo twists and turns the Howard Dietz/Arthur Schwartz classic almost as a warm up to Abbey Lincoln’s ‘The Music is the Magic’. 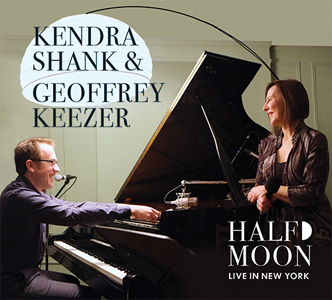 The latter song which comprises sonorous lower register singing, fluttery vibrato and imaginative freedom on the part of Kendra Shank and crisp, no-nonsense tempo, bright-edged, perfectly turned-out complements from Geoffrey Keezer, is the crowning glory of an album by two stars who worship at the altar of originality. Ordinarily would seem hard to sustain the level that the duo achieves in just the second song of the album. However, what follows is song after song that takes ‘Jazz Lied’ to a whole new level. The breathtaking cascade of words and music from Norma Winstone and Fred Hersch – ‘Song of Life’ – is just one example. ‘Half Moon’, a song that was ‘found’ in a ‘large dome-shaped lamp shade’, according to the singer features both Shank and Keezer inventing on the fly as each catches the music’s joyous preplapsarian innocence of spirit that inhabits music in the thrill of discovery. This sense of wonder continues through ‘Life’s Mosaic’ which, as it turns out, is a re-imagination of Cedar Walton’s ‘Mosaic’ by John and Paula Hackett. Thad Jones’ ‘The Summary’ reincarnated as ‘When Love Was You and Me’ pays homage to Abbey Lincoln, not only by its inclusion here, but in the wealth of emotion that Kendra Shank and Geoffrey Keezer deliver – both in sound and in silence.

I called this music ‘Jazz Lied’ earlier because the exploration of poetry and music contained in each of the song seems to dwell, if not on the ‘pastoral’ themes, then at least in the romantic themes. The characters in these little pantomimes are played by a singer and a pianist with unimpeachable credentials. Shank and Keezer have stellar biographies. And each knows when to shine and when to recede from the spotlight and let his or her partner shine. This characteristic belongs to classic lieder and is on display throughout the recording. Colours and textures abound in vocals and in the piano accompaniment and if a blank canvas were provided as a backdrop to this record, something bewitching and magical would be left behind on it after the last sounds have faded and died in most appropriate ending entitled ‘A Weaver of Dreams’.

Track List Alone Together; The Music Is the Magic; Kneel; Song of Life; Half Moon; Life’s Mosaic; When Love Was You and Me; I’m Movin’ On; Healing Song; You Are There; A Weaver of Dreams.