A first listen to the young tenor saxophonist, Ken Fowser’s performance on Standing Tall left me enormously impressed. A second and indeed a third hearing prompts, once more, enthusiasm for his shot-from-guns virtuosity, his leaping into the fray like one fearlessly possessed. No reservations arise when studying his compositions, which are youthful and ebullient, yet erudite and featuring wonderful twists and turns that far belie youthful bluster and experimentation. Mr. Fowser is much to my surprise, a serious composer with a serious knowledge of jazz and its pantheon of gods and other celestial beings. He has, therefore an exacting sense of history and although he sometimes forms a straight line from Benny Golson to the present he is quite his own man, with a singular voice and a surprisingly individual writer as well. 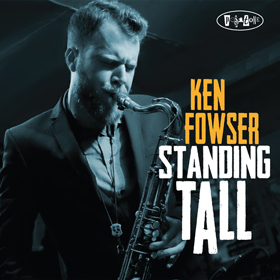 I am the first to celebrate such individuality for its extra edge and audacity and take no issue with his occasional impetuosity under studio conditions. His producer Marc Free does not seem to mind and seems to encourage these forays into youthfulness. So while you are left to wonder at his blaze of youthful power and aplomb in the inchoate whirl of compositions that stretch from Head Start to Somebody’s Got To Do it from this same set where the compositions break out into frequent moments of light and jazzy boperation, you are also left dumbstruck by a great maturity of imagination about this virtuosity of dreaming; a player with a classic poise that illuminates the work here rather than take away from the composer’s high-octane rhetoric and fervour.

Of course, none of this would matter if it were not for his doppelganger, Josh Bruneau on trumpet, Rick Germanson on piano, John Tiemann on drums and Paul Gill on bass. Their powerful contributions beg instant acknowledgement. Happier in forte and fortissimo than in pianissimo and piano Mr. Fowser is also hardly without his gentle tremulous end to long and loping lines. He is also relentless in the magical trellis of his melodic invention and the generation of harmony that he leads Mr. Bruneau, Mr. Germanson and Messer’s. Gill and Tiemann too. The result is a performance of great import as you may expect with Marc Free’s legendary touch on all of his (the producer’s) recordings.

More generally, heard as part of Mr. Fowser’s audience, many of these performances would carry you all the way. In the more relaxed all-acoustic circumstances of this recording no reservations about sound and content can occur. At his best Ken Fowser reminds us of the power and moist tone colours of his instrument fired to fame by any of the songs on this album. In the turbulent rhythms advancing us to the climax of this recording you can only marvel at Ken Fowser’s early achievement while looking forward to hearing him in similar circumstances again. Recorded sound is good, but that may be a function of listening to the music in mp3 format. I wonder what the full range of a recording’s fidelity would sound like coming from studio monitors.

Track List: Head Start; Lucid Dreaming; Filling In The Blanks; Off The Path; Mode For Red; The Fade Away; Patience And Optimism; Standing Tall; Hanging On; Brick’s Tune; Timeless; Somebody Got To Do It.

Since his arrival on the New York scene in 2005, Ken Fowser has continued to steer traditional harmony in uncharted directions. His lyrical approach to line construction and depth of harmonic sensibility allow him to record and play all over the world with such master players and burgeoning stars as David Hazeltine, Ugonna Okegwo, Donald Vega, Willie Jones III, Rick Germanson, Quincy Davis, David Wong, Jason Brown, Dezron Douglas and Rodney Green. Read more…