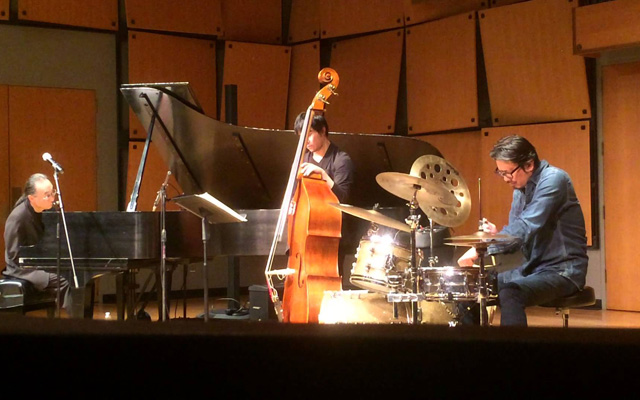 Of the four great Japanese musical presences in Jazz history, three – Toshiko Akiyoshi, Yosuke Yamashita and Satoko Fujii sit at two opposite ends of famous eras: bebop and the freely improvising avant-garde; while the fourth: Kei Akagi bestrides the two citadels, dangling almost dangerously in between. Perhaps much of this has to do with that most famous period in the Mr Akagi’s career: the time he spent in the band of Miles Davis in the late 1980s, the contribution cannot be underestimated, much less forgotten, given the exactitude with which Mr Davis hand-picked his men. Appropriately, Contrast & Form is a further testament to Mr Akagi’s proclivities as well as an indication of where he is today, musically-speaking.

Contrast & Form is built around a larger work – a suite of the same name – by Kei Akagi that occupies pride of place on this album. In the preamble – the approach to the citadel, so to speak – we are treated to some of the most marvellous, authoritative pianism on works that are full of melodic consonances, while also stretching the intellects and intuitions of each of the members of this extraordinary trio. The album begins with one of them: “In The Fold”, almost an invitation into the great unknown, a sort of melodic softening-up of us before the harder-edges of freer improvisation really begins. 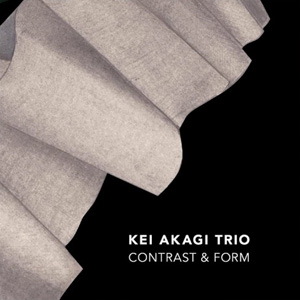 We are given a hint of what is to come on the next two pieces: “Playground…” and “Ame to Kaeru…” and then hit with the angularity of Wayne Shorter’s brilliant piece, “Limbo”, played with appropriately unequal angles.

In the silence that follows the dying notes of that work Kei Akagi breathes deep into his minimalist self, conjuring the ghost of his old boss, on “Simply Five”. And thus we are eased into “Contrast & Form”, a sumptuous and musically thrilling. There is a gentle virtuosity here and it is one that never overpowers the content of the music, but enhances its prevailing sensuous – almost vocal – writing. Worlds of darkness and light dance and collide in the three movements. Piano and bass seem to speak most plaintively to each other and the drums beats a tattoo – which seems to conjure an almost militaristic rhythm that carries through, with rising and falling pulses, into the dramatic, atmospheric dénouement of this piece.

Just as an overwhelming sense of mystery pervades the movements of “Contrast & Form” a somewhat simpler form of playful enigma courses through the dancing “Count Nine”, almost as if the pianist were playing blind man’s buff were with the audience he cannot see, for obvious reasons. Not uncharacteristically, drummer Tamaya Honda and bassist Shunya Wakai join Kei Akagi in returning us and Mr Akagi back to his melodic consonant playing, with some of the most explosive playing on record from then on to the enigmatic “Where You May Be” which ends this rapt and highly charged recording; a vivid reminder of why Kei Akagi has created for himself a unique place in modern piano history.