The elegant beast that Miles Davis unleashed is alive and well with the inimitable flutist and alto saxophonist Karolina Strassmayer and drummer and percussion colourist Drori Mondlak. Clearly teamwork makes the dream work in this case, time after time. These two albums released in September of 2022 are no exception. The husband [or wife and husband, if you prefer] have continued to pledge their artistry – drawing other artists: bassists, pianists and others who appear fully attuned to the artistry of Ms Strassmayer and Mr Mondlak.

The effect of imposing their combined vision on others always seems to have profound musical consequences – especially in these two instances. This is due, in large part, to the thematic content; to the fact that music flows freely from the inner consciousness, permeates the artistic natures of each of the musicians, swirling around deep inside their beings before issuing forth.

The music that ensues is always spontaneous. Thus it transports the listener to quite another world. Make no mistake the music – while it always involves musical conversations between the players – is propelled by the sheer force of Ms Strassmayer and Mr Mondlak, who drive the melodic, harmonic and rhythmic content with sure-footedness.

Karolina Strassmayer plays music as if she were some profoundly gifted vocalist “singing” her way through the alto saxophone or one or other flutes that she plays. No matter what [she is playing] her instrument is always lustrous and high-sprung. This is true whether she is exploring the highest register of her alto saxophone or the flutes that she plays on this album.
Drori Mr Mondlak may not surround himself with a battery of drums the size of which surpasses the drum set of contemporary rock drummers [some of whom are dwarfed by their equipment]. However his instrument[s] are masterfully tuned so that he can switch to playing a percussion-melody, often making to harmonic contribution, and always providing a mighty rhythmic edifice to the music so that principal melodic characters – Ms Strassmayer, or the pianist and vibraphone player – can take flight. 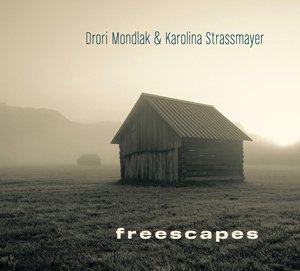 Drori Mondlak & Karolina Strassmayer: Freescapes is the first of the two albums under review. As the title suggests in no uncertain terms, the repertoire that is committed to tape is played almost completely in the spur of the moment. This is first confirmed by the brief introductions that each of the project leaders have committed to paper in the folder enclosed.

It bears mention that the word “brief” is the key [word] for by its brevity it enables the listener to focus completely on the music as it tumbles out of the respective instruments forming, as it does so, into songful melodies that are picked up and developed by the musicians. Mr Mondlak usually sets the rhythmic motors going. After igniting each of the pieces he introduces the music’s pulse and sets a pace for the improvising musicians to pick up and develop melodically and harmonically.

Thus, it is then Ms Strassmayer who gives the music wing, her saxophone, or flute[s] evocative of often preternatural musical sounds; or suggestive imagery such as bright lights or dark nights of hope, despair; sadness and effervescent joy. Inner feelings and emotions are revealed without an iota of maudlin sentimentality or even gratuitous abstraction.

The apogee of this repertoire is the “Freescapes Suite in Three Movements” Mr Mondlak is the principal protagonist in all three movements cued in by the instruments he uses to beat his drums, caress the cymbals to create rolling thunder or the tuneful hissing of cymbals.

There is a point in the proceedings – one in which the musicians are lifted by pianist Rainer Böhm’s modal excursions invoke the spirit of John Coltrane – the phase in the icon’s explorations when he reached into spirituality and looked beyond interstellar space. However, the pianism and voice is quintessentially Mr Böhm’s.

The deep growling contrabass of Thomas Stabenow holds up the rhythmic and [often] harmonic bottom end of the music to majestic effect. This is held in high relief [musically speaking] on “Both Held and Free”, when Ms Strassmayer makes her entry playing the flute, with the contrabassist holding his own in the depths of the music.

Mr Mondlak closes out the repertoire with “Octopus Dance”, reminding us as he does just how musically dexterous he is with just two pairs of limbs. All in all, this is an album to die for… 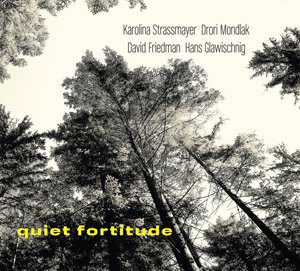 Karolina Strassmayer & Drori Mondlak: Quiet Fortitude This music is partly an outflow of the preceding album, but it is also so completely different in themes and musical gesture that – as an album of music – it virtually creates its very own separate niche in which it glows, beckoning the listener to give it the rapt attention that it absolutely deserves.

It bears mention that this music is made from the perspective of resilience arising out of the feminine persona. This means, of course, that the music is “led” [so to speak] by the voice of Ms Strassmayer as issued from her flutes and alto saxophone. One might hazard a suggestion that [these works] arise from an extra-musical source.

If one immerses oneself in the music completely it is possible to feel the force that drives it as arising [principally] from yin-yang prevalent in [preternatural] nature [of the music itself]. AT the very outset, Ms Strassmayer creates and moderates the musical discourse with her flute. Thus a natural outflow of yang ensues: a feeling of being bathed in shafts of warming light. This is also magnificently evoked by the radiant tintinnabulations of the vibraphone of David Friedman.

Meanwhile the drums and alto saxophone duologue on “Peacemaker’s Paradox” brings a sense of darkness; the music, that is, is swathed in an aura that is suggestive of thick clouds – even gloom, brought about by the rumbling and thunderous roar of mallets on timpani [the kettle-drums of Mr Mondlak’s drum set]. The music is forceful, dark, and yet a highly effective devolution of Ms Strassmayer’s and Mr Mondlak’s tone-painting upon the story elements [of this] programmatic music.

Elsewhere, “in “Both Held and Free” while playing a solo Hans Glawischnig makes a mighty roar on the contrabass, invoking the force of “yang” once more.

The most extraordinary facet of this music is the fact that the musicians – almost certainly at Ms Strassmayer’s behest – re-create the emotional content of [her] ideas and vision by manipulating the tone palettes of their own instruments.

How else, indeed, would it be possible to convey in eloquent – and no uncertain terms – the meaning of “Quiet Fortitude”, or paint a line evocative of the earth’s “Horizon”, or how, indeed to make music like a Liszt-like sigh on “Aahhh!”, the latter music seeming to exhale like the release of a collective musical breath. The effect of this music, from end to end is, in a word [or two]: absolutely magical…