The challenges of interpreting Morton Feldman’s Triadic Memories are not lost on Judith Wegmann. “[To be able]… to understand this as best as possible… I have to use [the] calculator to arrange it in my head, to be able to interpret it freely later…” she said half-jokingly recently on social media as she documented her preparation for the performance. However, it is hardly likely that anything Morton Feldman could be perceived as a “challenge” for a pianist as prodigiously gifted as Miss Wegmann. Her technique has been rigorously and finely-honed to perfection and whose creativity is informed by unlimited curiosity matched by extraordinary levels of intuition and invention. 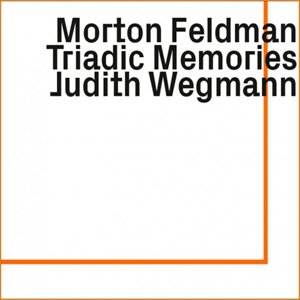 Morton Feldman’s work – from his late-period – seems to dally interminably with an ephemeral, almost mystical gracefulness as it moves slowly from one triad to another, each preceding triad basking in the resonant afterglow of the sonic waves that announce it. As the triads move forward and backward in their gently rocking motion, the very recognition of each triadic sound echoes with its richly reverberating and quantum waves undulating in a kind of mysterious waffle that seems to hang in the air around the room. Certainly in “Triadic Memories [beginning]” on disc one, Miss Wegmann brings Mr Feldman’s sound-world to brilliant life as she dwells in the small, soft and unhurried musical gestures which emphasise the physical detail of instrumental timbre.

By the time we reach disc two – what Miss Wegmann refers to as “Triadic Memories [conclusion]” – the pianist references what the composer often referred to as “a conscious attempt at formalising a disorientation of memory”. Miss Wegmann can do no wrong as this music seems to live and breathe in the almost limitless freedom [of choice] over pitch and note duration. Perfecting the manner in which the piece unfolds, Miss Wegmann brings to it a kind of anarchic counterpoint in which the [triadic] material disconcertingly overlaps and shifts, morphing from a preoccupation with the exploration of timbre to a fascination with time.

The piece – rightly so in Miss Wegmann’s mind – seems to have no beginning or end, no intention or direction, and yet listening to it heightens aural awareness to such a degree that the smallest modification of the chords possesses a resonance and an integrity that is quite startling. Miss Wegmann’s performance is exquisitely honed to reach the greatest extremes of softs and muted-louds through the disorienting repetitions of Mr Feldman’s structural labyrinth. A performance to die for…