Home Music Jonathan Saraga: Journey to the New World
This is a glorious album and no matter what kind of music he makes next the reputation of its creator, trumpeter Jonathan Saraga will forever be measured by his mastery of sound worlds that pour in from musical topographies he might have – viscerally speaking – only fleetingly experienced. By his own admission this deeply meditative music was written after he was struck by the teachings of the Indian philosopher and sagacious seeker, Sri Aurobindo and his ardent spiritual collaborator, Blanche Rachel Mirra Alfassa better known as “Pondy” Mother, or “The Mother”, both of whom were also world renowned for the ashram – Auroville – that they set up in the South Indian city of Pondicherry. Sri Aurobindo’s profound teachings might be much too complex to discuss here, the snapshot that helped ‘make’ this album is as follows:

Sri Aurobindo argues that divine Brahman (that which connotes the highest Universal Principle, the Ultimate Reality in the universe) manifests as empirical reality through līlā, or divine play. Unlike many Hindu sages Sri Aurobindo did not posit that the world we experience is an illusion (māyā); instead he argued that world can evolve and become a new world with new species, far above the human species just as human species have evolved from “lesser” (animal) species. Having internalised this central tenet of Sri Aurobindo’s philosophical teaching Jonathan Saraga has attempted the proverbially Himalayan task of distilling its essence into the music onto this disc. 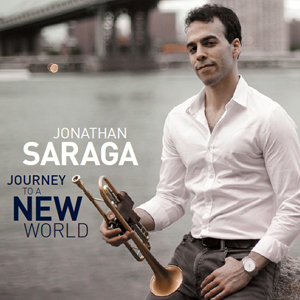 Compositionally speaking the greater challenge is certainly to craft a whole suite of songs in order to not only delve deeper into the teachings of Sri Aurobindo described in the sages dialogues with The Mother, but flesh them out while crafting individual songs.

It is a measure of the indelibility of the imprint on the songwriter and trumpeter, Mr. Saraga that he has succeeded in shaping superb music both for himself as well as for the rest of his sextet. Moreover it is difficult enough to recreate an Indian philosophical milieu without Indian musical instruments, but to express its context in a manner contiguous with a specific spiritual philosophy (such as Sri Aurobindo’s) deserves recognition. Each song on the disc relates to some part of this spiritual practice. The titles are highly suggestive of Sri Aurobindo’s work and they also relate directly to some of the tenets of his teaching. Mr. Saraga has written wonderful booklet notes to go along with each. However, it might be more exciting to experience each (song) blind; then go back to them after reading the booklet notes. The experience of this extraordinary music will be heightened after that as will a gorgeous version of the Beatles’ “Fool on the Hill”, which seems to fit right in with the rest of this music. Most importantly each of the fine artists on this disc deserves special praise for being so in tune with Jonathan Saraga’s music.