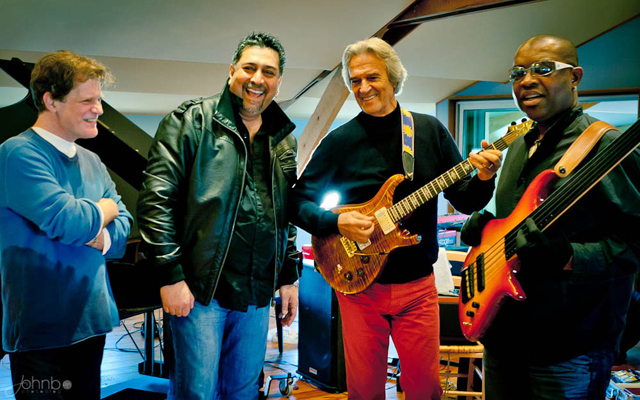 John McLaughlin is one of the few guitarists alive today whose very suggestion of a note is like a corona emerging from the nuclear furnace of the sun. And there are a myriad of moments such as this on Live at Ronnie Scott’s, a recording culled from two longish sets that he played with the latest incarnation of The 4th Dimension, featuring Gary Husband on keyboards, the bass guitarist Etienne M’Bappé and drummer Ranjit Barot. Each of the nine pieces on this disc seem interminable and allow each member of the band to explore in great depth musical ideas built on a plethora of melodic motifs, contrapuntal conversations, harmonic arabesques and polyrhythmic gestures.

Like much that can be scanned across his musical topography, the music of John McLaughlin on Live at Ronnie Scott’s builds on new structures that keep opening us to the moment which accepts everything, especially those rare moments of complete musical ecstasy. Rhythm is present in all places, yet attached to nothing, enacting a unique dialectic all its own. Although there is really no work on this album that can be singled out 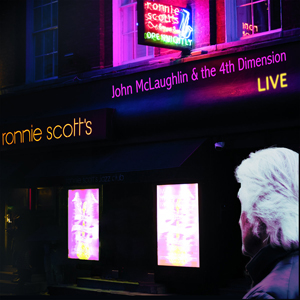 for special scrutiny of the McLaughlin effect, one could just as easily consider “Meeting of the Spirits”: here, for instance; his every silence – just as his every sound – is a sacred space resonant with creation; each note pings into existence from a cosmic void expressly to fill the void in our inner ear.

Like many musicians whose lives were touched by Miles Davis, John McLaughlin probably began to journey towards musical nirvana, finally expanding his consciousness with the defining moments of Shakti. But his adventures into the mysteries of the aural universe have never ceased. Along the way he has met and made music with many remarkable people. The members of The 4th Dimension seem to have formed the strongest bond with the guitarist. Consequently Mr McLaughlin has also had a most significant effect on his current cohort and we hear this especially poignantly on “Sanctuary” a song that John McLaughlin once famously played the genre-defying session with Miles Davis, Bitches Brew. On Live at Ronnie Scott’s the song becomes a shoe-in for “Vital Transformation” and then “Echoes from Then” which herald a sort of homecoming as well as a propulsion into what Mr McLaughlin once called ‘the emerald beyond’. This is truly an album to die for…