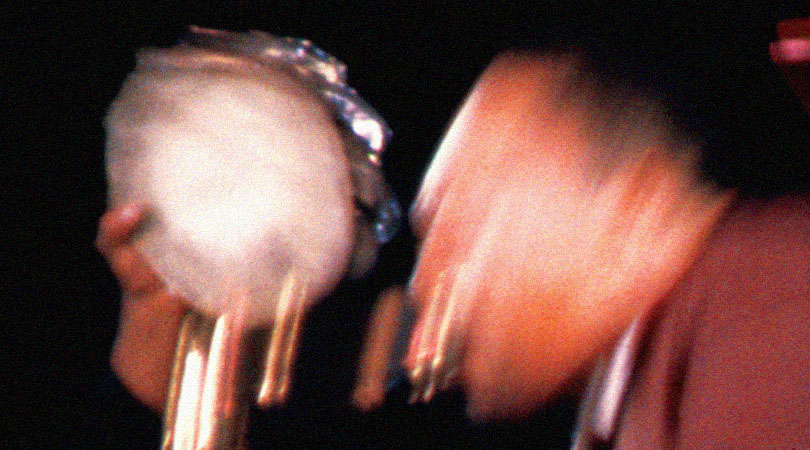 The noise about Offering has died down. Now is a better time to take stock of what happened at Temple University on November 11, 1966, a scant eight months before John Coltrane died at age 40, while scaling the height of his powers. Just a little over two years prior to this Trane had fallen through a portal; landed in a time warp and produced what was then his most important recording, A Love Supreme, but who knew that he would go on to greater things as he probed the spiritual universe of which he was now a part? His mind appeared to be at peace. Anyone who talked to him then would attest to that fact, but his spirit seemed restless as he went on a quest to find his Holy Grail. Several visionary albums ensued: Ascension, Kulu Se Mama and Meditations all between 1965 and 1966, and then the flute album, Expression, his last studio album in 1967. Just before that Trane played a familiar haunt, the Village Vanguard. This session was captured in “Live at the Village Vanguard Again” (1966). Something was already happening to Trane during the days and months and years between A Love Supreme and Expression, indeed his entire career after his sojourn with Miles Davis ended in 1957. He had opened a door to his soul and was being beckoned in. His playing was becoming more urgent, as if he had come to be aware of his own mortality. He began to probe into his heart and soul and use his infinite mind to explore in great depth, the extent of his tenor saxophone and the soprano, which seemed to stand in for the primal scream—his own version for something Dr. Arthur Janov began using around the same time. 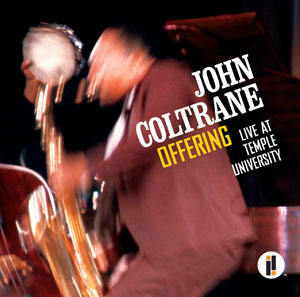 Bob Thiele, John Coltrane’s producer for a number of years, had given Trane a free rein on things. He was allowed unfettered access to the music especially at Impulse that came from the depths of his soul and the interminable fluttering of his spirit. His heart fibrillating instead of beating, John Coltrane had discovered a way to use his instrument as a voice for the hymn of the universe. This recording Offering gives further notice of that fact and serves to punctuate his breathtaking live performance at Temple University with an ellipsis that became an inadvertent announcement for the following chapter of his life and music, which, as it happens turned out to be the last of his ever-so-short life. Here Trane’s playing on tenor is shrill—he shows that he became part of the Trinitarian form that Albert Ayler once suggested. In fact his playing—once a doffing of the proverbial hat to Sonny Rollins and Dexter Gordon—now suggested the spiritual yearning that arose from Albert Ayler-like screeches and howls. His tenor sounded as if he was playing a soprano saxophone and his soprano playing sounded like the Indian shenai or even a nageswaram as his voice became shriller and more soul-searching, indeed, more urgent. And when he found he had superannuated the two instruments he reached for the flute, the reed of the gods. His introductions to the songs on the disc (“Crescent,” “Leo” and “My Favorite Things”) followed the Indian tradition more than they did western music. Each was like an alaap—a long statement of purpose and musical introduction to the melodic and the harmonic structure. The plethora of drums, playing incessantly was the shape of his African-ness turned universal in the Eastern sense of rhythm—almost uncountable. Chords became non-existent and the human voice, mostly projected through the saxophone and the flute, became a vessel for communion with the God of the Universe. Musically Trane had reached nirvana.

This recording is consubstantial with the volumes of music dedicated to Trane’s spiritual connection with the Divine. It is also further evidence of his lasting influence on musicians such as Alice Coltrane, Pharoah Sanders, Archie Shepp, Wadada Leo Smith, Anthony Braxton and several other jazz musicians. The ultra-absorbent John Coltrane, who had for years imbued the celestial voices of the universe, was now transmitting these back to the universe. In “Leo,” a monumental call and response session between Trane (his African-ness and his Universal-ness) and the Divine God omnipresent in every corner of the universe that Trane was crying out to. Now the symbolism of “Offering” and the song long-considered one of the great re-inventions of the John Coltrane repertoire “My Favorite Things” with its long introduction and its pliant melody becomes more urgent and more poignant. Each is accompanied by what appear to be drums of destiny. And so intense is the music that it appears to catch fire and burn brightly. So great was his influence on the musicians of this group that they too seem to be aflame—especially the drummers and Alice Coltrane, who has a superb turn in “My Favorite Things”. The end result is that this recording becomes a truly special and awe-inspiring work from one of the most enduring musicians of any era. It is further evidence that Trane was unique and special in a transcendental way. As a result, no more must Trane recordings be measured as commercial entities. They are—like the recordings of Charlie Parker and Albert Ayler—musical missives from another realm; a secret place that they inhabited during their all too brief stay on earth, with but a few mortals en route to their spiritual Valhalla, long before they actually got there.

Merely mention the name John Coltrane and you’re likely to evoke a deeply emotional, often spiritual response from even the most casual jazz fan. Born September 23, 1926 in Hamlet, North Carolina, John Coltrane was always surrounded by music. His father played several instruments sparking Coltrane’s study of E-flat horn and clarinet. While in high school, Coltrane’s musical influences shifted to the likes of Lester Young and Johnny Hodges prompting him to switch to alto saxophone. He continued his musical training in Philadelphia at Granoff Studios and the Ornstein School of Music. He was called to military service during WWII, where he performed in the U.S. Navy Band in Hawaii. Read more…