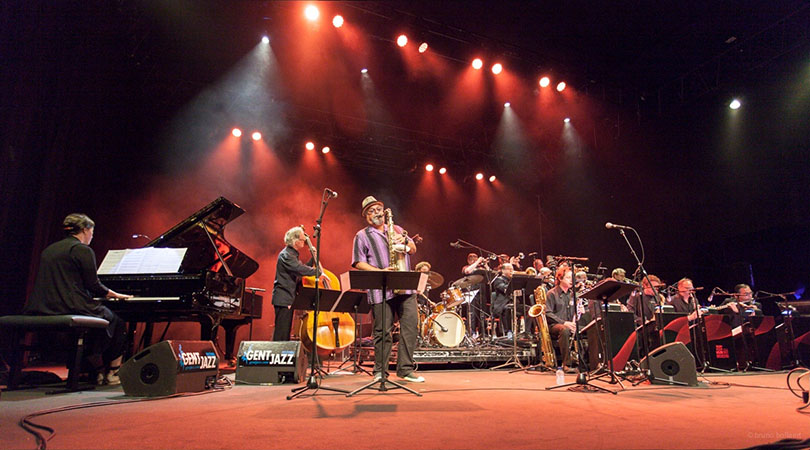 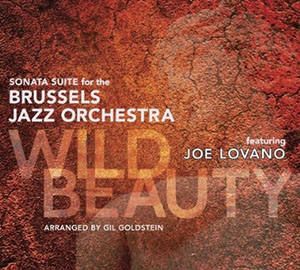 It is just like tenor saxophonist Joe Lovano to make a beautiful recording, but also one which is also quite full of surprises. This is Wild Beauty , what Mr. Lovano calls a “Sonata Suite,” which he put together and which was arranged by the ever masterful Gil Goldstein, and which Mr. Lovano plays with the Brussels Jazz Orchestra conducted by Frank Vangée. The titles of each sequence of the suite attest to Mr. Lovano’s enduring love of Italian locale and culture and because he was born Italian this music has a special meaning and feel, almost mimicking the lilting accent of Italian. Mr. Lovano’s gentle vibrato at the end of certain lines and phrases also mimics the manner in which spoken Italian ends with graceful undulations in the accent of the speaker; almost as if it was being sung. But something else marks the singular voice of Joe Lovano—in addition to his singing manner—and that is the broad, brogue-like warmth and moisture with which he enunciates his musical sentences. Conversely there also seems like there is a certain vulnerability in Joe Lovano’s playing. That probably comes from the forthright and humble manner in which he sings his melodies and lets the harmonics slide as he rolls his notes one over the other in an elliptical line.

Here, on this recording, Mr. Lovano also has the mighty support of the Brussels Jazz Orchestra. This exquisite ensemble may not be as famous as other orchestras in Europe, but the musicians play together as if they were a well-oiled machine, their machinations, are far from mechanical. There is a big heart in this orchestra and are well-rehearsed and have in fact bought into the ideology of the Sonata Suite. Both Frank Vangée and Mr. Lovano are great leaders. Mr. Lovano’s commanding tone is heard throughout the suite and all the lead soli are his. Memorably, his opening solo on “Wild Beauty” describes the thing of beauty—much like the 19th century romantic poet John Keats described in his poem Endymion he sees in the multiplicity of things—in musical topographical terms—in the sweep of the epic tenor solo; in terms of an imagined landscape, very possibly Sicily and finally the visage of Mr. Lovano’s mother, to who is part of the ongoing sub-text of the music. And certainly all of the set pieces form one graceful movement after the other, with Joe Lovano engaging members of the Orchestra, from Frank Vangée to trumpeter Nico Schepers, trombonist Marc Godfroid and pianist Nathalie Loriers. The majesty of “Viva Caruso” is one of the finest aspects of the music. But perhaps happiest of all is when Mr. Lovano pays a glowing tribute to Ben Webster, on “Big Ben”.

It has always been a known fact that Joe Lovano has a spiritual side and this is shown in how deeply soulful his sound is. It is possible also to assume that Mr. Lovano actually digs deep and he reaches beyond where most saxophonists go, and while there is no holy rolling in his voice, his rhythmic inflections sometimes come together in a blues shout, or in alleluias that might wake up a sleeping congregation. Some of this may be heard in “Our Daily Bread” and certainly in “Big Ben”. This is something that is almost a forgotten fact; that Joe Lovano has also paid his dues and has climbed every mountain to become a tenor saxophonist with the mighty tone that is heard throughout this stupendous recording.

The Brussels Jazz Orchestra (BJO) is not the kind of jazz orchestra that sticks to standards. It prefers to achieve the highest level by composing original music, creating unique arrangements and playing inventively as well as passionately. In fact, it really is jazz with a dynamic orchestral sound, with a classic strength in which each musician is also a brilliant soloist. Call it an ‘orchestrated passion for jazz’ that incites BJO to create world-class music.

Who comes to play with BJO depends on the project. In addition to BJO’s own productions, the orchestra works with well-known musicians from all over the world. In that way, BJO has established a reputation at home and on relevant jazz stages abroad as Jazz Middelheim (Antwerp – BEL), Flagey (Brussels – BEL), Jazz at Lincoln Center (NYC-US), Muziekgebouw aan het Ij (Amsterdam – NL), Concertgebouw (Amsterdam – NL), Jazz à Vienne (FR), Paris Jazz Festival (FR), Guimaraes Jazz Festival (PT) and many others.