First of all if you, somehow enlightened, came to believe that Portugal was home to merely one truly interesting international contemporary music label, perish the thought. The Porto-based musicians’ association, which is also an artists’ cooperative that releases the music of its members on the label Porto Jazz is one of the finest producers of jazz and other contemporary music. All releases are limited editions with exquisite cover art; have no gratuitous liner notes; just the music that goes for the proverbial jugular. The album For Mad People Only by Berklee-alumni and vibraphonist Jeffery Davis and his quartet is another fine example of the kind of music that seems to be encouraged and exquisitely recorded and released by this label. 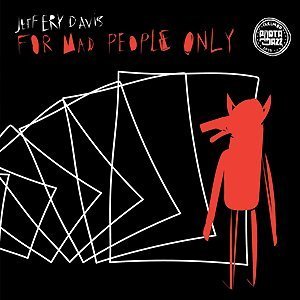 For some years now you could have confined your jazz and exploratory music CD-buying to releases by European artists (notably Portuguese ones) and still found your library shelves groaning under the weight of music of variety, depth and invention. Mr Davis is American, but now almost permanently living and making music among his Portuguese brethren. With him are pre-eminent Portuguese artists who play piano, saxophone, bass and drums and add wondrous layers of tone and colour to this music. But Mr Davis leads with his highly individualistic, difficult-to-classify genre. The recording, as you might expect, has de rigueur roots in and branches from Jazz on the surface, but deep inside it is teeming with so much more; all of which in a mistura fina that is difficult to pinpoint.

Mr Davis skillfully and imaginatively and, of course, subtly mixes in elements of other contemporary forms constantly ringing in the changes. Pieces such as “Who Said Monopoly Was Fun” develop from more than the delightful ennui of its title and from a beguiling, elegant melody into a darkly exquisite piece. Other songs, such as the mysterious “Mr Bloom” are brilliantly quirky and the diabolically entrancing “For Mad People Only” is a masterpiece of aggression as well as clever harmonics. All of this (including the rest of the repertoire) also shows Mr Davis to have a special way with his instrument, his musicianship redolent of arresting colours and textures.

His quintet of course share his vision and artistry in a wonderful manner as the music shines with a considerable degree of balance and integration of melody, harmony and rhythm, of composition and improvisation, of exploration, individuality and tradition. All of this is impressively maintained throughout this fine music, making for an album to absolutely die for…