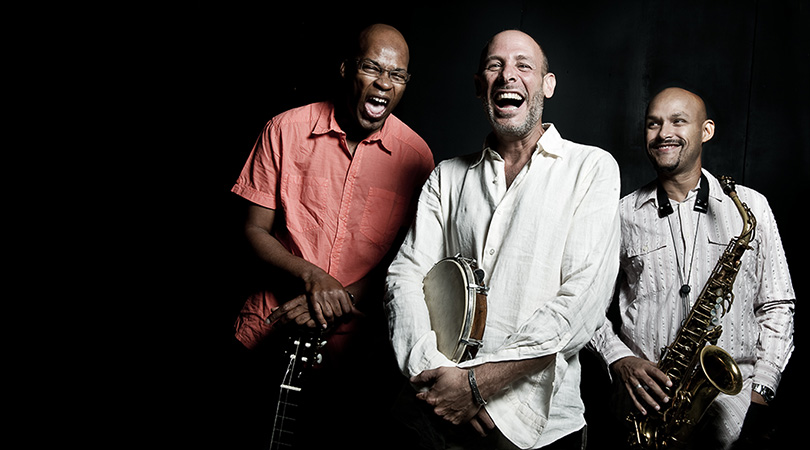 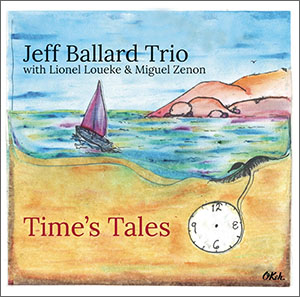 Jeff Ballard has spent the equivalent of a month of Sundays casting his shadow along with bassist Larry Grenadier’s in the Brad Mehldau Trio. So what does he do when he ventures out on his own time? He takes the difficult and almost defiant high road as a percussionist, casting himself as a front-ranking melodic instrument. Mr. Ballard then goes on to establish, at first tenuous relationships with the guitar-playing and sometimes yowling Lionel Loueke and the alto saxophone playing wünderkind, Miguél Zenón. Mr. Ballard, further turns his drum set and his assorted percussion into something that comes as close as possible to the chants of the human voice, which appears to be sending out loosely coded messages that bounce of the trees and the sky returning to earth, as they once did when music was communication and music was a pure expression of emotion and love, and therefore was story telling among the griot of Africa who sailed to America and brought with them the celebration of Congo Square.

Jeff Ballard’s Time’s Tales is all this and more. “Beat Street” tells that story: the anecdotal one that once brought all manner of characters to New Orleans and to the celebration day in Congo Square, when the big boys and girls and the voodoo shamans and the musicians came out to show their stuff. Mr. Ballard’s playing here is absolutely magical. Every beat; every stroke on the drum; every swish of the cymbal is the “rat-a-tat” and the “tic-a-tic” and the breezy “ssssh…tish” on the ride cymbal as the drummer sings and brings an ancient story to life. This does not mean that the music is leaning back in time; rather that Mr. Ballard is bringing that period in time into the future. This may be listened to along with “Free 1,” which is a dramatic turnaround from the New Orleans of “Beat Street,” but it is also an extension of that time into a future time when the beat of the street becomes the new beat. Miguél Zenón’s saxophone plays a brilliant countermelody as the music—raw and visceral—tears the roof off the proverbial and artificial ceiling that might be created by the music seeking to expand the horizons from whence it comes.

This is a bold and brazen recording and it often ventures where even jazz cognoscenti feared to go until John Coltrane and Albert Ayler went there freely. The fearless music of “Free 1” and its consonant “Free 3” are two such examples of this music. There is also a venturing into unpopular territory and the radicalism of the record ultimately sustains the gut-wrenching and ghostly screams of “Hanging Tree”. This is something rare, as few musicians have dared to bring up the issue of race, except Warren Smith and a few other musicians. The music that follows this chart is one of some repose and listeners might feel some relief from the invasiveness of “Hanging Tree”. But not for long: even “Dal (A Rhythm Song)” with its melancholy guitar and saxophone and its drums filled with premonition can startle and guarantee a dark narrative filled with foreboding.

Time’s Tales is an exquisite album and listeners might do well to listen with the heart for there is a deeper tale to tell here, thanks to the soul searching that drummer Jeff Ballard did.

Jeff Ballard grew up in Santa Cruz, California. He recalls when he was a child laying in bed listening to the music his father would play every weekend: Count Basie, Ella Fitzgerald, Louie Armstrong, Sergio Mendez, Oscar Peterson, Milton Nascimento; how he loved the sound and the speed of Ed Thigpen’s brushes on the snare. “I remember feeling the power of a Basie big band shout chorus which would then suddenly disappear into some quiet dancing riff. It was the swing in it, which excited me the most. I also remember how it felt traveling thru sounds of the jungle in a Milton Nascimento record. The drums, percussion, and voice, would sound as if they either came from the earth or were made of water. And I was so happy to hear the joy of Ella and Louie singing and playing together. I think that that early exposure has made me part of what I am today, especially in regards to my love for sound.” Read more…