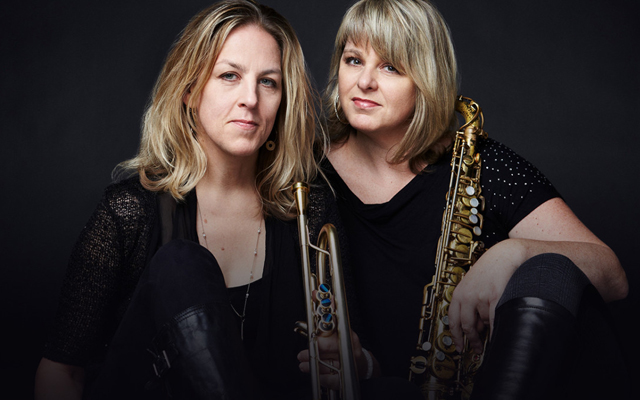 The sisters, trumpeter Ingrid and saxophonist Christine Jensen were born accomplices and as such need no perceptible communication between them. And yet, even in the relative silences of Infinitude much is said and sung. Moreover, even more magically, the Jensen’s welcome three other musicians into their galactic space. It bears mention, though, that even as this is a musical journey through interstellar space, it is rooted as much in the concrete here and now as it is in the limitless future. It is solid state music with a palpitating heart and it explores the very singular topography of the Jensen’s art.

The music on Infinitude is pristine; like pure life expressing itself within and through its unique structure. Each phrase enunciated by Ingrid and Christine Jensen is like an absolute moment; alive and significant, and made up of notes made as if by blackbirds rising from a northern field; delicious and beyond compare. In “Echolalia”, for instance, the melodic line keeps opening us to the moment, 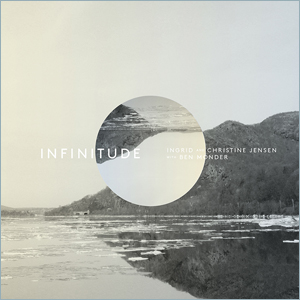 announced by the solitude of ecstasy (and even of sadness) of guitarist Ben Monder, bassist Fraser Hollins and drummer Jon Wikan as they enact a didactic between each other and the Jensen‘s precious sound.

Ingrid Jensen’s musicianship – even sans electronica – radiates from the bell of her horn like a corona emerging from the nuclear furnace of the sun; hot and sublime. Meanwhile in sound and silence, Christine Jensen responds with seemingly sacred spaces resonant with creation. Together their notes ping into existence in the Infinitude of the cosmic void. And both trumpeter and saxophonist separately and together are blessed with the spirituality of guitar, bass and drums. Thus, imperceptibly as it were, rhythm is present in all places yet not attached anywhere. Each musician’s solo surprises like a dazzling aside piercing through hers and his mindstream like bolts of pure sunshine ricocheting through the infinite universe of Ingrid and Christine Jensen.

One would be hard-pressed to encounter music such as this. It is music seemingly made up more of silence than extraneous sound. Yet everywhere – in the ethereal trumpet, or the echoing guitar and the solitary saxophone – there is inconceivable, heart-rending beauty… giddy expositions of musical joy and ecstatic imagery ensconced in the rolling thunder of bass and drums.