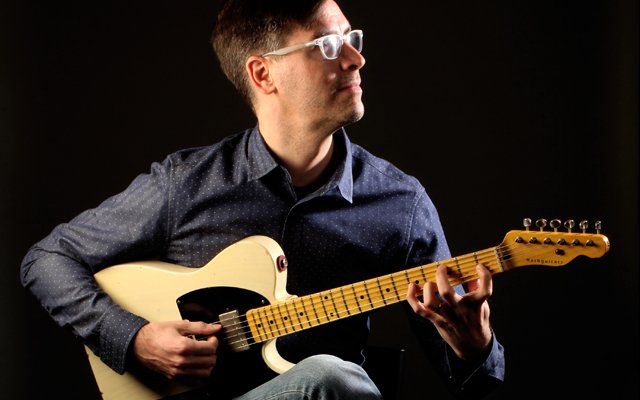 The music of Ian Wardenski – played by this formidable quintet featuring Tamara Tucker’s eloquent, whistling wail – has an audacious angularity which makes it so compelling to the discerning listener. Trust, which is the name of this album, appears to have a wonderful metaphoric meaning – musically speaking – because the guitar-playing leader Mr Wardenski is [musically-speaking] asking the members of the quintet to make a huge [melodic, harmonic and rhythmic] leap of faith with the music’s odd melodic and harmonic shapes and its odd meter.

Much of the music – reaching its apogee in the three movements of the suite: “Matching Energies Molulus” – unfolds in wonderful whorl-shaped phrases and longer, sculpted lines. Often these reform into balletic arcs and seemingly rambling ellipses. 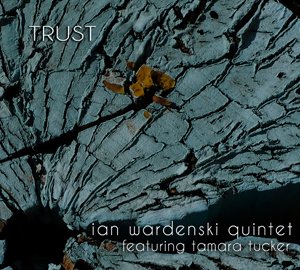 They are either propelled by Mr Wardenski’s muted and twanging harmonics that leap and pirouette like a mad gazelle in a balletic pas de deux with the singer Miss Tucker.

Its bewitching music and you can be sure to be riveted by it not only because of the obtuse angled leaps that Miss Tucker and Mr Wardenski make melodically and harmonically, but also when alto saxophonist Mercedes Beckman joins the chase. Moreover Amy Shook plunges her contrabass into the depths of the music’s rhythm, not only anchoring it all, but her suggestive dancing all around the root notes of the chords is beckoning and very imaginative.

Alto saxophonist Miss Beckman’s tone is raspy and elegant, like the swishing of raw silk caressing melodies. Jerry Ascione’s pianism may appear to recede into the background, but make no mistake, he is the principle painter of this music’s harmonic soundscape, painting this with sure right hand arpeggios and broad left hands chordal brushstrokes.

Meanwhile the group’s drummer Frank Russo is outstanding both when he makes a solo sojourn as well as when he is playing in the pocket, enabling Mr Wardenski and Miss Beckman to undertake their solo flights. But these are just some of the reasons that make Trust eminently desirable. Mr Wardenski is going to be hard-pressed to match the music of this album, going forward…it’s that good.