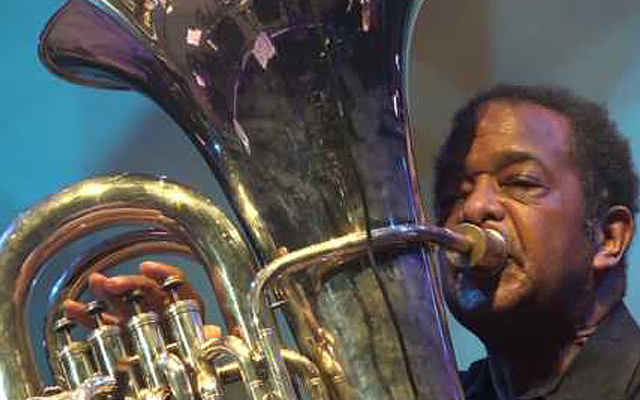 Make no mistake, the tuba does take centre-stage on the music of Gravity. However, the music inspired by and written for a wall of the lowest singing voices in the brass family is almost always a reflection of the unequalled genius of Howard Johnson. The mastermind and driving force of this sextet (septet, on five of eight tracks) of tubas, Howard Johnson has plowed a lonely furrow for many decades; paid his proverbial dues and is now enjoying the status of a legendary elder statesman of the instrument. With good reason. Johnson’s ‘singing’ voice is fused into the imposing tonal colours of the tuba with a brazen magisterium that has become a sort of palimpsest of our time. In that respect Johnson must be regarded as a genius who has done for his instrument what men like Jimmy Blanton and Charles Mingus, or Thelonious Monk and Herbie Nichols, or Max Roach and Elvin Jones have done for their respective instruments. That is to say, Howard Johnson has completely re-defined how the instrument might be played by extending its growling sonic range to include the proverbial bluesy wail in much the same way that Bill Watrous and Albert Mangelsdorff did for the trombone. 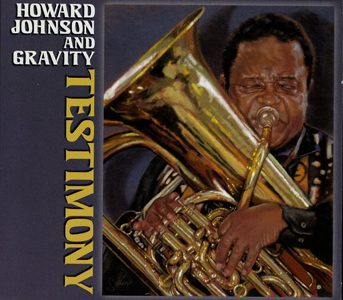 As on three other dazzlingly virtuosic discs Howard Johnson is joined by a group of other (younger) masters of the instrument. Testimony is a glorious sermon and sounds as great to preach as it is to listen to. Its music plunges into the depths of the indigo blues and flies off the pulpit led by one or other ‘pastors’ of the instrument, beginning, of course, with Howard Johnson. “Testimony” begins the preaching in the stormiest manner, with viscous textures in hectically fast tremolos. The lyrical entry of Johnson followed by Dave Bargeron clear the decks for more fascinating works to come. Naturally the congregation, as it were, is roused into worship – or in this case to wail the blues led by an ineffable vocal exegesis by Nedra Johnson on “Working Hard for the Joneses” before the final chorus and doxology. While the high tension of the music continuous through Testimony as the ensemble leads the participating congregation (you and my included) through one miraculous song after the other. And the only way out of here is to endure with “High Priest” and “Little Black Lucille” until the lofty processional of “Way Back Home.

The musical chemistry between the tubas and between the tubas and piano, bass (Melissa Slocum is spectacular on “Evolution”) and drums is entirely intuitive and gratifying. Velvet Brown, Bob Stewart, Dave Bargeron, Earl McIntyre and Joe Exley respond to this wonderful music with unfettered passion. Exchanges between soloists and ensemble are profoundly moving, especially on “Evolution” and “Way Back Home”. Ensemble passages sparkle with gravitas (of course) and vigour, while astutely placed solo movements are poetically declaimed. Testimony contains some of Howard Johnson’s finest writing (arrangements) for tuba and rhythm section. Soloists and ripieno alike respond with insight and feeling for the idiom that emerges as second nature. In the scheme of things Blues and Jazz, this is a High Mass; a going to church, a brassy “Hallelujah” chorale; trance-like exhilaration as never before.