Herb Silverstein’s biography tells you almost nothing about his passion for music or even that he plays the piano and has recorded with – among others – Bob Berg, Marty Morrell Jeff Drexler and Jeff Rupert. His skills have everything to do with medicine and it is somewhat ironic that he specialises in enabling his patients hear better and, on some cases, opening their ears so that they can hear without impediment. It takes some skill and creativity to practice that kind of medicine. So it is probably hardly surprising that he has big ears when it comes to music itself. 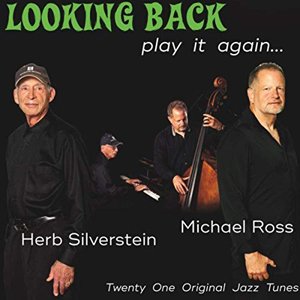 Someone approaching his music for the first time – as I do – will find that not only does he have a fine ear for music, but his pianism is also both technically and expressively impressive. Of course, it also puts him at an advantage here, on an album of songs such as Looking Back, where he is heard virtually alone save for the contrabassist Michael Ross. This puts him and his pianism directly in the arc-lights. The portrait that emerges is one of uncommon gentility, underlined by the ability to play with expressive nuance. His articulation and expression is also secure and Mr Silverstein handles improvisation with a simple gracefulness.

Which brings us to the small matter of original work? The big surprise is that Mr Silverstein has decided to produce an album made up entirely of original compositions. Not many pianists – indeed not many musicians – have had the gall to record an entire programme of originals and that too, not having shown us how they are capable of tackling the repertoire that already exists. But by taking a stab at original repertoire Mr Silverstein displays a supreme confidence in his own skills as a composer. This courage is commendable. Also commendable is that Mr Silverstein’s music is articulate and tasteful as well.

There is a certain gentleness in his songs. Melodies are smooth and guileless. No need for any aggressive and stabbing pianism. There is also considerable degree of dynamic contrast and no lack of sensibility either. The sparks of vitality are somewhat subtle and it appears that Mr Silverstein puts greater emphasis on the poetic elements of melody than the attempt to be a smart-alecky. For all these reasons and much more no listener will be disappointed with this repertoire. The bassist Michael Ross is a sensitive accompanist and both musicians do exceedingly well melodically, harmonically and rhythmically on “High-Heeled Lady” – as they also do elsewhere on this recording.