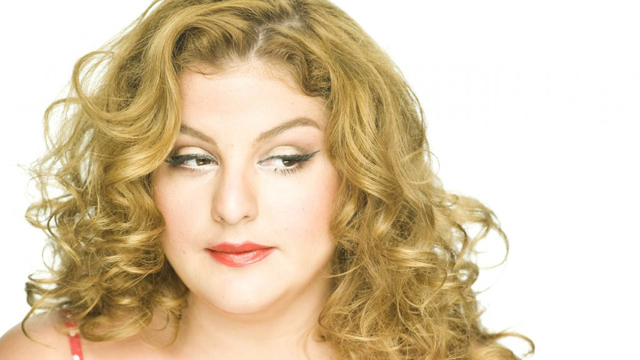 In this stark package lies a disc featuring music by a sultry vocalist, a Greek Diva Helen Tzatzimakis. She sings in a voice so distinctive that I don’t believe I have ever heard one like hers before, except perhaps the voices of Sheila Jordan and Abbey Lincoln. Ms. Tzatzimakis might be spoken of in the same breath as those two priceless vocalists as she is, like them, an uncut diamond. On Soulfully Ms. Tzatzimakis has trawled the ocean for music from Greece, the Balkans, Latin-America and the US and come up with a programme of 10 distinctive songs. There is a quotation that graces the inner cover of his disc and it is from Bertolt Brecht, and it says “In the dark times/will there also be singing?/Yes, there will also be singing/about the dark times.” What a poignant quote from a Brecht poem. How Brecht-like are these songs. And how beautifully lyrical as well. 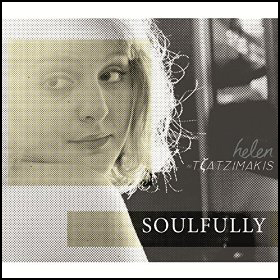 Helen Tzatzimakis’ words seem to dally interminably; hang in the air, almost weightless despite their density. They pirouette sullenly, egged on by Manos Athanasiadis’ piano and sometimes the heraldic trumpet of Stelios Chatzikaleas; always with the gravity of Antonis Arvanitis’ bass. Ms. Tzatzimakis’ lines thus unwind and leap in Pas de Deux as if they flow from a balletic score. This is, of course, as much to do with the singer’s magnificent turn as it is due to marvelous arrangements by the pianist. It also feels, at times that this record flows like lieder in the finest tradition of that genre except that this is music, which although it takes its cue from lieder, is sung in a more modern song form. And Helen Tzatzimakis is perhaps the most perfect vocalist to sing it. Her vocal craft draws on the visual elements of the songs and she captures the desolation of many of the songs here with haunting beauty; the other musicians following suit with as much beauty as well. “So Sad” a piece crafted by Marianne Faithful, Barry Reynolds and Steve York is not only aptly titled, but brilliantly performed, Stelios Chatzikaleas’ melancholic trumpet adding much beauty to the song.

Although Ms. Tzatzimakis’ performance must be judged on the entirety of the programme, I cannot gravitate finally to her English-language repertoire. Willie Nelson’s “Crazy”, Billie Holiday’s “Don’t Explain” are so memorable that they seem to linger in the soul forever. Here is a singer who does equal justice to music she sings in several languages. Never have I heard such an extraordinary performance. Ms. Tzatzimakis is a singer who wrenches your heart in a vice. You struggle to breathe, you struggle with tears and in the end this is like someone playing the part of a tragic heroine in a Greek play: here she is the reason for that dramatic catharsis you feel as from “Phaedra” so also from the other songs that Helen Tzatzimakis sings so unforgettably.

Helen Tzatzimakis has been studying music (piano, accordion and singing) for many years, taught by some of the most outstanding musicians, such as Elli Paspala, Claudia Delmer and Takis Farazis. She has also performed in many music halls and night clubs in Athens (Half Note, Vassilis’ Bar, Low Profile-Coffee and Whiskey, Jazz Point etc.) Furthermore she has participated in numerous music performances, organized by charities and others of international interest (European Music Day, UNESCO, and TedX Athens) whereas her special Tribute to Southern European Music (Jazzpoint, summer 2013) was highly suggested by the reporters of “Athinorama” magazine. Her first album, entitled “Kirki” was released in 2012 by Metronomos, in which lyrics by Manos Eleftheriou and Michalis Ganas are included. Read more…