Home Music Gui Duvignau: Fissura
Gui Duvignau’s Fissura, where a small collection of songs, is delivered wrapped in concrete imagery is an ‘imagist’ work in the classic sense of what Ezra Pound meant by the word. The reading of these seven works is a superb collection, admirably and intelligently delivered by virtuoso musicians. And while the output, here, at least, isn’t extensive, it is extremely attractive. The French-born, Brasil-based musician fronts a fearless ensemble that appears to savour every sonic and atmospheric challenge. On this 2016 disc the players take up a classic, Duvignau’s ‘Fissura’, and other striking works – including one by Dorival Caymmi – requiring similarly scrupulous attention to expressive extremity. 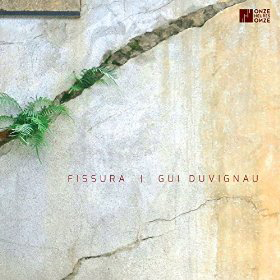 In a curious and welcome departure, the recording contains works that are notably more conservative in style – both ‘Fissura’ and ‘Sisyphus’ prove that being traditional-contemporary need not be at the cost of musical interest. But both succeed in placing Duvignau as a blazing revolutionary by comparison. This juxtaposition of character lets the listener go beneath the surface of Gui Duvignau’s invigorating and moody writing, with its homages to John Coltrane and Ornette Coleman, and plunge into a brooding and vehement sound world redolent of Bartók (minus the folk inspiration). The performance is gripping, and Gaetan Besson’s cleverly rendered spacious studio acoustic heightens Duvignau’s masterful musical suspense.

The players in the ensemble achieve a special balancing act of patience and ferocity in Duvignau’s ‘Sisyphus’, an intensely-felt score in which instruments engage in compelling duos (guitars), a fugue of doleful urgency and a farewell utterly bereft of hope. When it is played, as this ensemble does, with lines and layers of harmonic growth applied with seemingly personal intimacy, a bitter, depressing aspect is revealed that is only mitigated, not absolved, by the song’s final, richly intoned resolution, then underlined again by the conflicted last movement.

The rest of the music requires the utmost concentration if the intricate rhythmic figures and eerie effects are to seize the ears. Gui Duvignau and his ensemble do so through painstaking adherence to dynamics, accents, texture, syncopations over the bar and telepathic interplay. As played by this brilliant ensemble these compositions – the Caymmi included – are an exhilarating expedition that sets the scene for the bold journeys to come in the future work of Gui Duvignau.