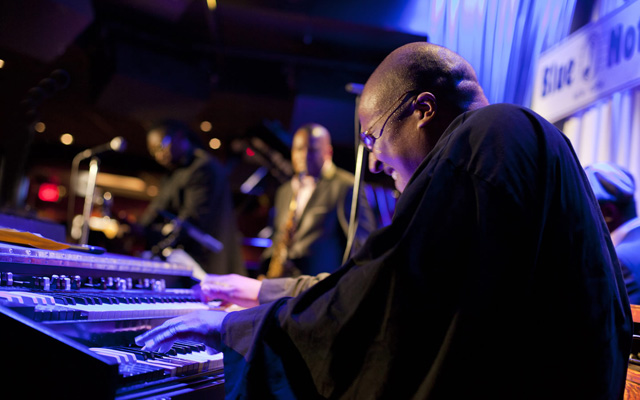 If we allowed our lives to be ruled by the all-powerful media – television, radio or print – the truth would be buried or at least forgotten within minutes; after all every outlet fights for advertising dollars and for share of voice, which unfortunately also means that Andy Warhol often comes in the way of Marshall McLuhan. Fortunately therefore, for uncompromising artists as Gregory Lewis whose Organ Monk, The Breathe Suite raises the pressing need to remember Michael Brown, Trayvon Martin, Aiyana Jones, Eric Garner as well as, happily, the Ausar Auset Society, that organization provides Afrocentric-based spiritual training to the African diaspora in general and the African American community in particular.

That Gregory Lewis plays the Hammond B3 organ lends itself to fortunate happenstance in that the organ has widely been regarded as an instrument of praise and worship and the music ministry. The ability of a player of the instrument to ‘preach’, however, depends not only on virtuosity, but the ability to move the worshippers to such an extent that they are transported to a higher realm, there to dwell in the ecstatic state of wonder. Although this music is not expressly intended to ‘praise and worship’ one cannot help being drawn to its themes and content to contemplate the terrible acts of discrimination that are continuously perpetrated upon the African-American.

The African-American artist’s – the music of Gregory Lewis – called ‘Jazz’ grew out of the Blues, which first began as a cry sent up to the white man’s God, to ‘let my people go’. And although it has come to be a celebrated as a proud facet of American culture, exported to the rest of the world, sadly, more often today for monetary gain than to tell, in protest, the story of an enslaved people, 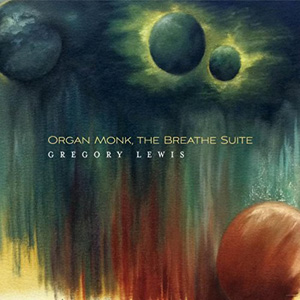 every once and a while there comes an artist such as Mr Lewis, who like, the great Jazz artists: Duke Ellington, Charles Mingus, Max Roach and Joseph Daley, among others, to shout in protest, if not to urge a people to rise up against ‘institutionalised racism’.

On Organ Monk, The Breathe Suite Gregory Lewis follows up his Organ Monk: American Standard released in 2013 with stunning success. As ever, Mr Lewis grasps the fatal troubles of the African-American: Michael Brown, Trayvon Martin, Aiyana Jones, Eric Garner – here celebrated in song – and numerous others who dwell in the music’s echo, by ‘going’ as operatic as the music demands, when it demands, making his musicianship dominate in the process, tapping into the subtle colours and textures of his daunting instrument to create a benchmark performance, worthy of some of the greatest written and recorded organ works.

Fittingly therefore, Gregory Lewis seeks transparency of texture, timbre and colour to allow the major ideas of the six movements of this suite to crystallise no matter what tempo is set. Sometimes Mr Lewis slows the pulse so that harmonic pillars become massive – as in “Chronicles of Michael Brown”. Elsewhere he sections off his band so that they scamper breathtakingly after each other in “Aiyana Jones Song” where they are as graceful as they are distinctive. Everywhere, of course, Gregory Lewis is a force of nature, tempering the B3’s granular sweetness with many ravishing moments and arabesques that soar effortlessly up to the uppermost rarefied realms of the stratosphere.

Two years age, in a review of Joseph Daley and Bill Cole’s Trayvon Martin Suite I once suggested that “Good music serves one of two purposes: personal gratification or social awareness. Great music invites the listener into the secrets of the soul and raises and changes the level of socio-political consciousness forever. This recording by the incredible Gregory Lewis is another reminder that it still holds good today.