Indian music is a deep study in communal expression. But be prepared: at heart every melodic expression floats on the wings of the Spirit, harmony is everything and improvisational expression is de rigueur, and only limited by boundless imagination. Both the musicians on this set, Greg Hatza and Enayet Hossain not only have a perfect understanding of these demands, but have a deeply empathetic understanding between themselves. Thus they are able to complement each other flawlessly, creating eloquent music, much of which is expressed in “song” and is therefore evocative of fine thumri, dhrupad and other quasi-secular forms too.

Both the musicians are mindful of the formal demands of his respective cultural topography. This is captured in the somewhat prescient title of this disc itself: thus Talking Hands goes beyond merely naming their artistic encounter, 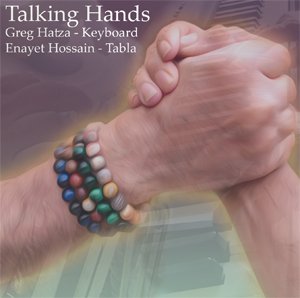 but appears to also suggest that quite apart from the music something deep and significant is being “spoken” about musical partnerships.

Therefore “fusion” is hardly a word one would use to describe what ensues on this CD. The music itself also goes far beyond the suggestion [to stretch a point] that “the hands are talking”. What is actually happening here is that the human physiology of these two musicians is given an enormous update. And so we perceive that music flows from the nerve endings of the two pairs of hands. Mr Hatza is thus able to bend notes, squeeze dyads out of the black and white keys and create a whirlwind of harmonic expression.

For his part, Mr Hossain defines each arc of his cyclical patterns shuffling imaginatively the talas that he has at his disposal. In his expert hands the nuanced syllables dhaa, ga, ge, gi, ka, ke, dhi, dhin, tin, tun, tit, ti, te, Ta, tr, naa, ne, re, kat, taa, dhaage, tiTa, tirikiTa whirr and hiss and rumble and thunder around the melodic lines, shaping the air in the room with extravagant and subtle rhythmic waves that fill out the narratives contained in each of the songs. Mt Hossain’s proven expertise in thumri and dhrupad are superbly showcased.

But make no mistake: each musician eschews gratuitous virtuosity and the musicality of both musicians serves only the music, the individual narratives and – above all – the improvised expression that is brought to bear on the songs. Like all expressions of deeply spiritual music the listeners’ imagination is pushed to the limit albeit aided and abetted by some masterful visual expressions ensconced in the individual music. The best of these [expressions] lean towards the crepuscular – such as in “Dark Matter, “Midnight Mood” and “Deep Love”.

From the latter song “Sultan’s Dream” seems to be a natural and eloquent corollary. One would even offer the risqué suggestion that [“Sultan’s Dream” is a perfect, evocative portrait of the legendary Mirza Wajid Ali Shah, the eleventh, last, most significant and artistically-inclined sultan of Awadh, who would almost certainly have delighted in music like this.