Home Music Grdina • Houle • Loewen • Delbecq: Ghost Lights
Benoît Delbecq, François Houle, Gordon Grdina and Kenton Loewen are known for their extraordinary virtuosity. But on Ghost Lights they present almost the exact opposite of this in a world that complements it; slow, almost minimalist, yet strangely evocative, expressive and stirring music, deeply rooted in the African ethos. Often we hear something different, though, and this takes the form of occasional quick flourishes when the music changes very slowly, sometimes with a living, hypnotic pulse, at other times it is loosely co-ordinated with a bass bomb here or a drum motif there – each communicated almost subliminally to the mind’s ear.

Simple though the music sounds, the touch of these musicians – Benoît Delbecq’s on the piano or bass station, François Houle’s on clarinet and loopers, and electronics, Gordon Grdina with subtle manipulation of his guitar or electronic equipment, and Kenton Loewen’s drums and percussion – plays its intended role with each note dropping like a separate pebble into some invisible pool, sending out magical harmonic ripples. 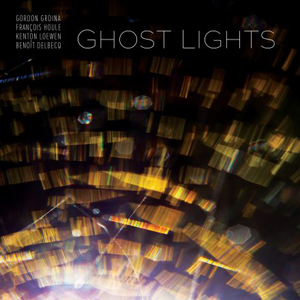 How much of the music’s effects are a direct response to the composers’ notation as interpreted by the performers (in through composed work, that is)? And how much is it like a Rorschach test where we hear virtually abstract interpretations in the form of abstract consonances and dissonances? Mysteries abound everywhere.

By its very slowness – especially on “Ghost Lights” – the performers encourage us to listen moment by moment rather than attempt to map the entire work. Each piece, each page of each score really has its own magic, which may also be useful to students of music who are out there, listening to notes, phrases, nuanced expressions, the lot, and who might often be left wondering how sometimes even a single sound of fixed pitch can ‘mean’ so much more than what is imparted to it when it is struck. And then, of course there is this: that it’s all authentic. This is the bizarre, centrifugal (or is that fragmented?) mental world of these musicians. Clearly that world is not always a happy place. But as Kafka maintained, it is often the souls in Hell that sing with the sweetest voices, and there are many moments on Ghost Lights, on “Waraba”, for instance, where the ineffable beauty and the netherworldly sweetness is close to heart-breaking.