The liner notes – not without good reason – on Yes and… Music for Nine Improvisers draws parallels between Jazz musicians and stand-up comedians. It’s a comparison prompted by Geof Bradfield that plays out with mighty swing and memorable results on this disc where Mr Bradfield is supported by a group of remarkable young artists who join him in living and expressing their joyous music in the proverbial moment. And if but for an hour or so, Mr Bradfield and his ensemble wrest the focus from New York to Chicago. 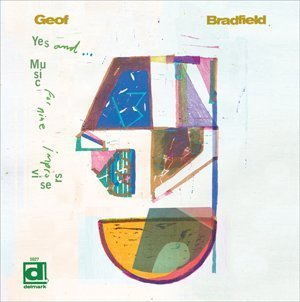 The eclecticism of this music recalls – in particular – two recordings made by the inimitable Don Byron who created the path-breaking Music for Six Musicians (Nonesuch, 1995), followed by You Are #6 – More Music for Six Musicians (Blue Note, 2001). Mr Bradfield’s endeavour does set his music apart and perhaps the most impressive aspect of this music is its immense stylistic assurance. Right from “Prelude” which is fleet-footed without sounding rushed. Details are given their full due, from the individual notes held not a moment too long, to the delicate equilibrium maintained in the smallest phrase. In the next piece “In Flux” and in “Ostinato” as well every gesture seems imbued with meaning and – especially in the latter – the whole work is motivated by an abundance of joy, with sly wit twinkling through from time to time. Meanwhile in “Anamneses” Bradfield and the rest of the musicians prepare and build the work’s climactic peak with consummate skill, (especially) Anna Webber lending the whispered bass flute an all but unbearably desolate resignation. Hardly has a work (on this album, at any rate) been more welcome on an album of this nature, where all the hard work of improvisation seems to come through with effortless ebullience to bring a feeling of hard work accomplished so that the music can run absolutely free.

Throughout the bristling rhythmic vitality of this music, the tricky voice-leading and constantly shifting harmonic colours brought about by perfectly choice of instrumentation enables Mr Bradfield and the rest of the cast to never lose sight of the fundamental lyric impulse of this music. The mighty interaction between alto saxophonist Greg Ward and Mr Bradfield together with Miss Webber and trumpeters Russ Johnson and the incomparable Marquis Hill, with trombonist Joel Adams and the brilliant rhythm-section of guitarist Scott Hesse, contrabassist Clark Sommers and the unstoppable motoric impulse of drummer Dana Hall this music scurries on its madcap course to an implacable cadence. This is passionate music played with miraculous results and it is only fitting that it should be captured with great acoustic warmth on the historic imprint Delmark Records.