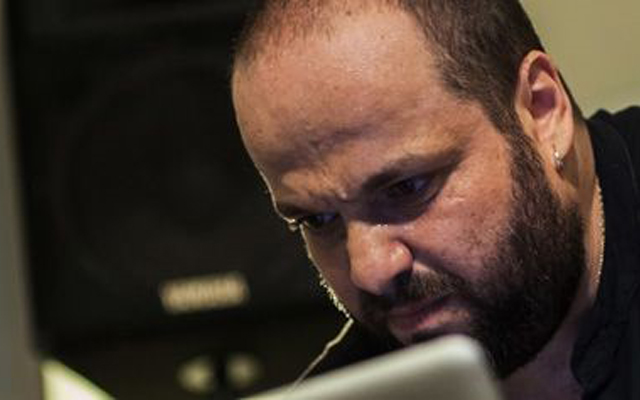 It is, by now, an aphorism that “You never know what the composer Gene Pritsker will create next”. His composes with chameleonic facility and like that fascinating creature whose every colourful incarnation is stunning, so too is the music of Gene Pritsker. However, unlike the improbable doppelgänger whose transformation is slow and statuesque, Mr. Pritsker seems able to make sudden changes in musical sensibility very quickly and seamlessly, often turning on a proverbial dime. Anyone forgetting how magnificently he can do so need only revisit Mr. Pritsker’s William James’s Varieties of Religious Experiences. Or as the case may now be: consider any one of these two records – Melodies Alone Can Proudly Carry Their Own Death and the more recent, live recording Rite Through An Eclectic Spectrum.

The title of the (former) chamber music recording comes from a phrase written in a 1943 essay Being and Nothingness by Jean-Paul Sartre; a take on Martin Heidegger’s Being and Time (1927). Heidegger’s an ontological investigation through the lens and method of his teacher, Edmund Husserl’s phenomenological enquiry. Phenomenology (which comes from the Greek phainómenon “that which appears” and lógos “study”) is the philosophical study of the structures of experience and consciousness. More to the point the Mr. Pritsker’s music gains much of its momentum from his own similar approach to his art – certainly in the profound depth of its vivid imagery. And time and again on both these recordings we are reminded of just that fact. 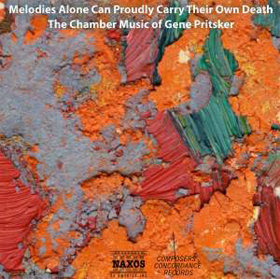 Gene Pritsker: Melodies Alone Can Proudly Carry Their Own Death – The Chamber Music of Gene Pritsker The imagery of the phrase from M. Sartre’s essay, in all its visceral surrealism, clearly powers not only the piece from which this album takes its name but in fact by the evanescent nature of the writer’s stream of consciousness almost acts as the heady catalyst for much of Mr. Pritsker’s music – for chamber or other ensembles. In the structures of these trailblazing structures Mr. Pritsker’s speaks with a new mature musical language, in which a sense of alienation and human frailty is never far from the surface. Often through the course of the repertoire he also shows an awareness of the concentrated and concise forms of someone like Webern, while also seeming to dwell in a realm of highly-charged expressiveness, not unlike the music of Bartók.

The musicians respond brilliantly to this music – from violinist Daniele Colombo on the pithy and gesture-packed “Opposite Extreme of Compassion” to the musicians of Zeitgeist on the gorgeously layered music of “A Certain Degree of Neurosis” and from the brilliant violinist Lynn Bechtold with the equally prodigious cellist Jennifer DeVore (the Zentripetal Duo) who make the black dots leap off the page in the compression and expressivity of “Melodies Alone Can Proudly Carry Their Own Death” to cellist Borislav Strulev who makes the sensuousness of the intense, richly clotted textures of the intensely sad “In Memory of David Gotay”. 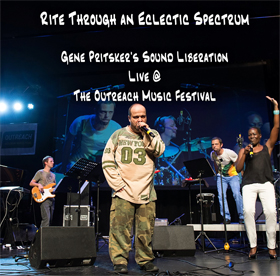 Gene Pritsker’s Sound Liberation: Rite Through An Eclectic Spectrum Appropriately named, the modern ensemble Sound Liberation assist him in blurring even the most distant horizons of the myriad of musical styles that are woven into Gene Pritsker’s music. The music of this recording is, as we might discern, is an angular doffing of the proverbial hat and a gently irreverent homage to Igor Stravinsky. And why not? Mr. Stravinsky would probably not have wanted it any other way – not that Mr. Pritsker, for his part, would have dished it out any differently either. Clearly though Mr. Pritsker clearly reiterates his modernist palimpsest through this work, an almost Dionysian masterpiece that appears to have both shocked and enthralled its audience. As always eight sections of this work are all pure-Pritsker in that you could not have predicted what you were going to hear until you actually heard it first at the concert where it was recorded and now on record here.

This is music with daring polytonality and tart rhythms. Like its inspirational (Mr. Stravinsky) predecessor it is born of its composer (Mr. Pritsker’s) the visceral music is unleashed from the very “Introduction”. It’s unrelentingly taut and momentous in its dissonances and asymmetrical rhythms and jolts the listener from first to last. The impassioned accounts of the narrative by Chanda Rule and the unforgettably raw energy of Franz Hackl’s trumpet both have an unmatched sense of earthiness, breadth and unbridled power. It is, however, a pity that no booklet with lyrics accompanies this package. This dims the experience somewhat and such a mishap must never be allowed to happen in future.