Home Music Fred Frith Live at the Stone: All is Always Now 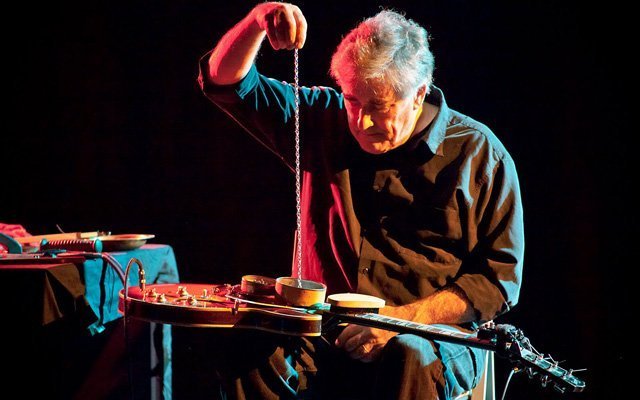 There are few artists who don’t simply express, but celebrate “the idea and its inherent elasticity” as Fred Frith. His music has embodied and engendered this essence as he has sculpted his every work while always remaining rooted in artful song. And now Mr Frith seems to have found yet another perfect environment to do what he does best: make magnificently improvised music; this time at the Stone where he served a residency between the 27th of February 27 and the 1st of March 2018. The result is this superbly recorded three-disc set featuring a proverbial Solomon’s mine of music with nineteen different musical partners from his trio that includes Jason Hoopes and Jordan Glenn to such luminaries as Pauline Oliveros, Evan Parker, Laurie Anderson, Sylvie Courvoisier, Jessica Lurie, Nate Wooley and a host of others. 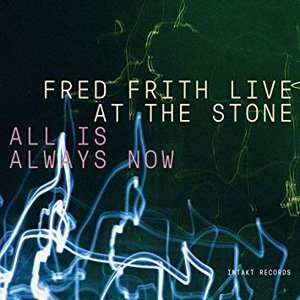 As ever, Mr Frith embodies the Platonic spirit for when it comes to his art, “the moment the musical material is ordered… it becomes culture and, as such, a given social fact.” In line with this Mr. Frith’s music – albeit songful in its own unique way – is also appropriately disruptive of stasis. It is both austere and engaging, and remote and is always crafted from a remote and precise beauty of a mosaic of instruments. It emanates, of course, from Mr Frith’s guitar, which is not only played in a myriad different ways, but virtually re-invented as an instrument every time he does so; and then there is the manner in which he loops into a dance with other instruments from bass and drums, to all manner of percussion, a piano, an accordion, a violin, another guitar all manner of found objects, a trumpet, saxophone and a many other instruments including those created from electronics. Finally and most majestically he engages with the human voice – here represented by features with Laurie Anderson, Theresa Wong and others.

From the fractal imagery of “Another Ship Moves In” the music evolves into works of stark contrasts and instrumental timbre in which Mr Frith and his fellow musicians, unwittingly perhaps, seem to reference Platonic imagery again as such music as “World of Grief and Doubt” and “Shrug at Truth” illustrate another Platonic dictum “beware of changing to a new kind of music, for change always involves far-reaching danger.” In keeping with that, of course, the music frequently sounds dangerous, with its proliferation of ostinatos between cool incantatory phrases and long musically sculpted lines. The resurrection of famous ghosts – in the form of Stravinsky, Stockhausen and Cage is also evident in the clear textures and motorised rhythms of “Veils” and “Evidence” with Gyan Riley and Laurie Anderson respectively. Meanwhile complex harmonic language is sung in “Shrug at Truth” with pianist Sylvie Courvoisier. Everywhere, of course, the raw intensity of the music is very much Fred Frith.

Throughout the repertoire on the three discs it’s clear that the works’ bristling energy is derived from Mr Frith feeding off his instrument as it engages with his musical partner and the respectful appreciation of knowledgeable and appreciative audiences at the Stone. Over a battery of strident and mellifluous as well as often compulsive dance rhythms interspersed with empathetic vocalastics the music soars. The perpetual restless energy of the instrumentalists conjures up more of a living and magically unpredictable nature of improvisations that Mr Frith and the rest of the musical cast find lurking in the atmosphere. The whole experience – while often unnerving – is, nevertheless as exhilarating as jumping into the unknown without a safety net in sight.