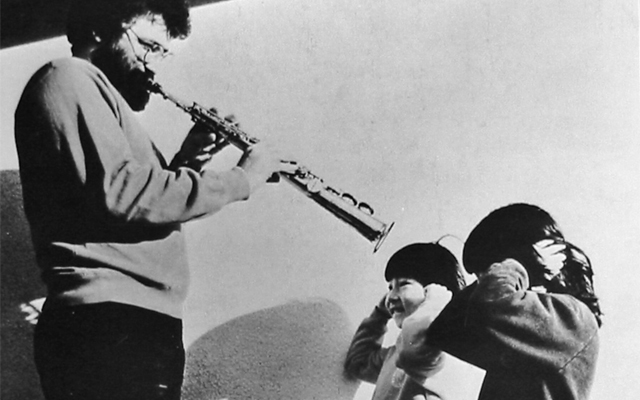 as the wind first appears on line 49 of Act 2, Scene VII in William Shakespeare’s As You Like It, spoken by the “Melancholy Jaques”, whom Hazlitt once described as “the prince of philosophical idler; his only passion is thought; he sets no value upon anything but as it serves as food for reflection”. Evan Parker’s music on this recording revisits Jaques (spelled “Jacques” by Parker in his notes to the recording), but hardly as one who is either “melancholic” or a “philosophical idler”. But rather, in his brilliant vivisection Mr Parker’s aural mnemonics appear through the bell of his horn more like lines freed not only from their function of representing objects in Jaques’/our world, but also as a musical language freed from its task of describing or bounding shapes or figures, whether abstract or representational, on the surface of our own minds’ ears.

And yet this music by Evan Parker, together with Mark Nauseef’s percussion colourings and Toma Gouband’s lithophones, is far from Shakespeare’s As You Like It. Mr Parker suggests that they (the titles/”phases from Jacques speeches in Act 2 of the play) might have more to do with the power of the cleansing fire (of) Evan Parker’s music. It is almost a cliché now, to describe this music as “extending” the sonic possibilities of the soprano saxophone. That fact was established a long time ago. 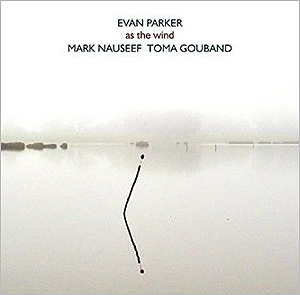 Clearly, however, Mr Parker employs extended techniques too. In fact, if Evan Parker were a painter working a canvas he would be doing it from the edges towards the middle, and again, having abandoned the conventional tools of a saxophonist, allowed his breath to be dictated by the interior bidding of his mind and his heartbeat.

Intellectual brow-beating apart, listening to Evan Parker and his very conspiratorial partners, Mr Nauseef and Mr Gouband, one makes the enchanting trip into a portal seemingly to explore with them the possibility of creating a monumental, pulseless music made up of great blocks of seemingly static, but subtly changing textures whose component parts flow seamlessly in and out of each other. There are many examples of this unbridled creativity, but one spectacular example is “ambitious for a motley coat” which seems to begin with a vast chord covering several measures played by the soprano saxophone and percussion, the sound changing as the players gradually withdraw from that early blast. The impact of the piece is splendidly dramatic, gorgeous and brimming with quite overwhelming brilliance.

Texture is everything: there are no silences; only long slurs and echoes after which the music seems to be punctuated by a series of crescendos. In moments of denser sound – as in “pipes and whistles in his sound” – the clusters (faux-chords) made up of closely adjacent notes are built up gradually in overlapping, skittering layers of music. Overall, there is always a sense of sculpted sound but the combination of instrumental timbres is often radiantly beautiful, suggesting bejewelled and absolutely aglow…

Track list – 1: as the wind; seeking the bubble reputation; like a wild-goose flies; make noise enough; ambitious for a motley coat; as a weasel sucks eggs; come warble, come; pipes and whistles in the sound; sans everything