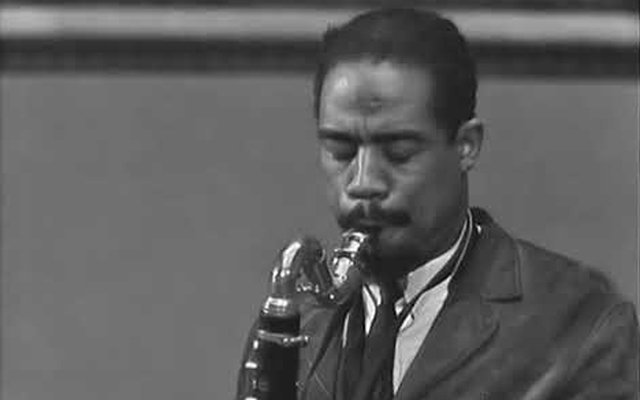 We hear both saintliness and sensitivity in Mr Dolphy’s achingly beautiful versions of “Alone Together”, “Love Me and in Duke Ellington’s venerable “Come Sunday”. In each of these Mr Dolphy the master of picking instrument and instrumentation, which often includes doing with them, what is completely unexpected. On Arthur Schwartz song with (lyrics by) Howard Dietz – “Alone Together”, the woody splendour of his bass clarinet is buffeted by frequent braying and evokes an emotional panoply of situations that are full of mysterious depths, expectations, frustrations, hopes and doubts, like the shattered shadows of a sinister, quasi-Mendelssohnian scherzo. The plaintive tenderness of “Love Me” is striking. In sheer colour and variety, in the depth of characterisation and the exceptional range and refinement of his musicianship Mr Dolphy imparts a power and tragic structure to the surrounding emotion of a simple ballad.

On “Come Sunday” his playing is the highpoint of the disc with his apparently effortless distinction between the many filigree lines and the effortless grace with which he seems to worship at the altar of Mr Ellington’s incredible music. These three examples are but a smidgen of the beauty of the works herein. Everywhere on these three discs Mr Dolphy leads his ensemble into another world. The variety and stylishness of the music is matched by the performances throughout. Mr Dolphy brings an effortless urbanity and lyricism to all the items, which are seductive as they are persuasive and each is the very object lesson in the very essence of style. The music is played with buoyant, aristocratic grace and psychological ambiguity and Mr Dolphy is almost effortlessly insolent on each of his instruments bringing a debonair virtuosity and swagger to flute, alto saxophone and – especially – the diabolically vexing bass clarinet, for which created a near insurmountable benchmark.

And then there are the other noteworthy aspects of this package: Apart from the size of the packages, however Resonance differs from Mosaic in one essential element and that the discography details in the latter label’s productions appears to have greater appeal to collectors who are attracted to the historic and academic values of the music. Resonance packages, though, appear to also appeal to those collectors who also favour sound-quality and place an emphasis on engineering aspects of recording productions, as perhaps they also listen to music on high-end audio systems. In this regard the efforts of George Klabin and Fran Gala of Resonance Records are beginning to compare quite favourably with those of the great Joe Harley once produced on his Audiophile Productions with Bernie Grundman, 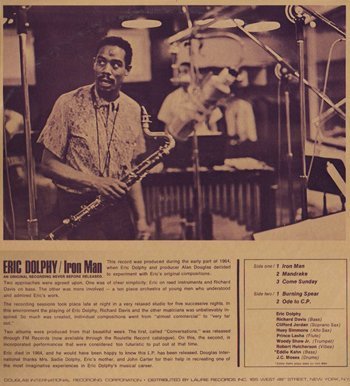 with what Jonathan Horwich does through International Phonograph recordings (when he does produce them), the recordings of Ken Christianson and the late Julian Vereker on the Naim label and what Doug Sax did with the Analogue Productions 14k gold discs.

Finally, with its booklets of anecdotal essays that focus not necessarily solely on the music, but often on the atmosphere ans aura of the session and the often colourful personalities involved, Resonance Records re-issues almost always draw attention to the often forgotten and unsung enablers of timeless music: it’s producers. In this case it is Alan Douglas, a man whose incredible contribution to music – not just that of Mr Dolphy – will almost certainly be minimised or even forgotten in time. In the case of Mr Douglas the essays by Bill Laswell and Mïchael Lemesre are especially important. So it is thanks to releases such as this one by Zev Feldman, George Klabin and others at Resonance Records legacies of those men and women who live in the shadows of great music will continue to have some semblance of a spotlight shone on them, and rightly so for many more reasons than one.