Home Music Eddie Daniels & Roger Kellaway: Just Friends
The Sony ECM 939LT microphone might not have captured the rolling thunder of Buster Williams’ bass the way it actually sounds, but consider this: it was the only microphone that George Klabin used to record this exquisite music by clarinetist Eddie Daniels and pianist Roger Kellaway on Just Friends. It happened on the 26th of November, 1988 at a concert in Max and Lorraine Gordon’s Village Vanguard and it kept winter at bay for a at least an hour more; this music of gathering warmth played by the clarinetist and pianist together with the bassist and a youngish Al Foster, drummer to the greats of Jazz. The word ‘Just’ (from the song “Just Friends” by John Klenner and Samuel M. Lewis) must never be taken lightly nor should the friendship between clarinetist and pianist, and while the music sounds wonderfully unpremeditated, it suggests a relationship that is anything but casual.

Both Eddie Daniels and Roger Kellaway already had brilliant careers and were – and indeed are – not simply masters of their respective instruments but masters of musical form as well. Moreover, despite this very mastery, there is never heard any lapse into politesse – even though the creation of pleasing, impeccably structures music comes so easily to both artists. The crowning example of this comes not only in “Wolfie’s Samba”, an Eddie Daniels piece that doffs the proverbial hat 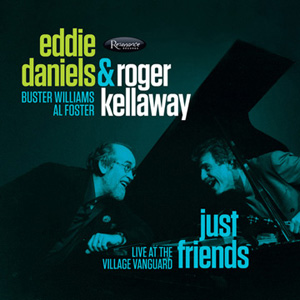 to Mozart, or “The Spice Man” by Roger Kellaway, but indeed on “Just Friends” with its wonderfully judged and sprung improvised introduction to the main melody. One can’t help but feel the creation of something absolutely rhapsodic – and mosaic – unfolding before one’s ears and eyes; indeed one’s heart too.

Indeed, Roger Kellaway plays the piano as a lark soars; just as when Eddie Daniels puts his licorice stick to his lips the result is a pulsating account that goes from bold declamation to hushed intimacy – sometimes even in a few bars. Listen to “Reverie For A Rainy Day” and you will hear exactly what this can sound like; for both men. Buster Williams comes into his own from the moment his fingers pluck the strings. His solo on “Just Friends” is combined with an acute sensitivity over matters of pacing of light and shade. While elsewhere on the recording within the overall fleetness of tempo and touch there are interludes of lush intimacy in which sentimentality is kept firmly at bay.

Al Foster plays his part with subtle eloquence. HIs conception of the music is organic and variegated, and as Mr Williams’ solo leads into gently into his (Foster’s) one becomes aware of the most persuasive and gorgeous playing. This is altogether beautifully fresh and energetic music-making from all four ‘friends’, who really get to the heart of these pieces. There is a real sense of playing for each other while managing to retain a sense of four individual voices especially in “The Spice Man”, which threatens to dissolve as a song every now and then, when the musicians’ mighty cadenzas roll in…But somehow each one pulls the song back together again in the end. An exhilarating experience if ever there was one.