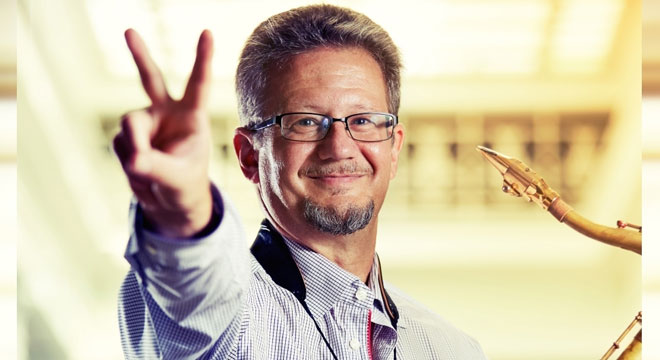 It would be difficult to imagine a much better quintet recording than New Ties and Binds. The performance of tenor saxophonist Don Aliquo and trumpeter Clay Jenkins together with the rest of the members of this quintet combines poetry with a cool aristocratic dignity—the latter due in no small part to the bass of Rufus Reid. The treatment of these songs is not so much austere as infinitely subtle: all the nuances of tempo and phrasing which make for such beauty are there even in such briskly rhythmic movements as in the title track, but they are never obtrusive. 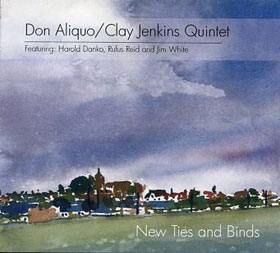 It is clear that the Don Aliquo/Clay Jenkins Quintet’s sojourn focuses the music’s alternating wildness and fragility with altogether unique perception. Theirs is an agitated, combustible and loving view of music, a credible trip into its world that reflects older playing styles, not by exaggerating or by abandoning vibrato, but by constantly varying tone, tempo, finger pressure and modes of attack. These are not “comfortable” performances. They pass on cosmetic appeal and would rather grate and rail than pander to surface “gloss”. So be warned. But they are profoundly beautiful in their truthful appropriation of music that can be both poignant and aggressive.

The quintet play up extremes in the music. They accentuate the colour and the drama of the compositions. The opening of “New Ties” for instance is beautifully managed—sustained, with clarity of counterpoint pointing up the individuality of the five players as well as their collective finesse—before giving way to the lolloping of “The Grand Entrance” that, so often with this composer, attempts a carefree demeanour and makes sure that this is pulled off with alacrity. The shifts in mood in “Glory” are a real challenge, here superbly caught, such as the hymnic later choruses, which yields to more agitated writing, a gear change that you simply don’t notice here, so naturally is it done. With musicians such as Rufus Reid and Harold Danko, together with Jim White doing such wondrous things for the quintet, it is no wonder that the brass and woodwinds can shine gloriously.

The finest work here is “The Grand Entrance”, Mr. Aliquo’s most classical in design, though unconventionally so. It is alive with the sound of surprise and with the panoply of a whole summer season (in which the flies are far from merely “murmurous” at times)—so sayeth the drummer’s cymbals. The quintet is impressive and traverses some bleak open landscapes before its wild, stormy finale. The Don Aliquo/Clay Jenkins Quintet gives superbly vivid and thoroughly prepared performances that catch the varied expressive characters of each work, combining with each player to great effect. Dave Kowalski’s sound too is excellent. This is disc to die for.

Saxophonist Don Aliquo has been describes as a player “with an articulate flow of always surprising ideas, sophisticated with a dexterous technique and an incredibly smooth tenor sound that seduces rather than shouts.” Although his early influences are saxophonists John Coltrane, Stanley Turrentine and Dexter Gordon, his recent recorded output also displays the influences of Lester Young, Stan Getz and Joe Henderson as well. Read more…