Over the past few years Diogo Vida has released five recordings and usually focuses his energies in the more intimate surroundings of a trio or quartet although on a couple of occasions he has appeared in solitary splendour as a solo artist in the studio and on stage. In every event the effect has been impressive. This is why the allusion to the ineffable power of El Duende – in fact the very title of this album itself – is completely demonstrable by the music which Mr Vida p[lays with scrupulous attention to detail. 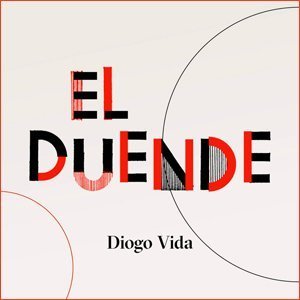 From the ample, upward yearning phrases that open “Decision”, it is clear that Mr Vida’s approach to Jazz is direct, no-nonsense and free of eccentricity. He is willing to work within the parameters of contemporary thinking on the Afro-American idiom, fashioning from familiar tools a rich imaginative melodic tapestry that is uniquely his own. Apt voice-leading features prominently this music as it unfolds leisurely, presaging the music’s prevalent mystery and the gradual unfolding of it as well. Mr Vida is expert at treading lightly across the lyrical spaces within these tunes as they progress towards happy fulfilment. The searching slow movement of “Farland” is seamlessly folded into the work’s progress, culminating in a finale of crystalline polyphonic clarity, its folk-like digressions and delightful naturalness.

A pert and understated rendition of “Wapita!” sets up a vivid contrast for the gloriously welcoming lyricism of “Vendaval”, where the rollicking high-spirits of the delightful finale are contagious. There is something sublimely serene in an almost cosmic sense in the music of this disc. Mr Vida’s pianism never seems static because of the deftly woven textures of his instrument are lifted up by the bass of Yuri Daniel and the drums of Vicky Marques; together all three musicians constantly engage the imagination. It is empathy of this kind that firms up the mighty integrity of Mr Vida’s architecture from multiple points of view within the musical narrative. This is a distinct sign of maturation on the part of Mr Vida’s musicianship and makes for a particularly impressive recording.