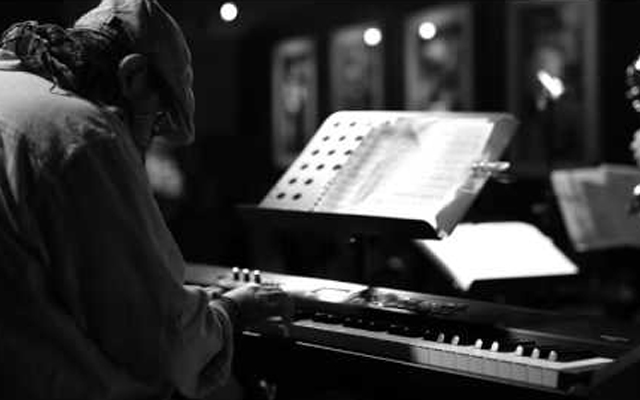 The term: “…and just play” – music, of course – might not readily be associated with this disc by Dino Massa and his Kansas City Quintet but it ought to be as it is the spirit which has imbued the entire music on it. The words come at the end of a quote attributed to Charlie Parker which begins and ends thus: “Master your instrument, Master the music, and then forget all that bullshit and just play…” The words are not only so admired by these musicians, it would seem, but appear to have been taken to heart in every nook and cranny of this music. The result: music that embodies old-fashioned swing in every tempo and time signature that it is played; no extraneous ornamentation, not a note, line or phrase out of place; everything in melody, harmony and rhythm pressed into the idiomatic cause of the music. No bullshit. 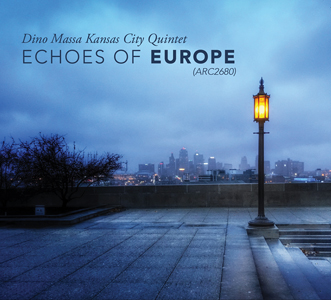 These are moments worth savouring, because discs documenting music as exquisite of form and function – in all its nudity – as this, on Echoes of Europe come along only very rarely. It might also explain the relative obscurity of the work of the pianist Dino Massa as well as saxophonist Christopher Burnett. The former is the notional leader of this ensemble and it is the latter – who ought to be enjoying some time in this spotlight – is a musician not likely to be associated the alto saxophone, NATO, and the preservation of creative thinking through a record label he founded with another (tenor) saxophonist, Erica Lindsay: ARC (Artists’ Recording Collective). The narrative of how they came to be associated is well-documented in the notes and in the music; Massa has written most of it into the songs on this disc. The narrative plays out in the pictorial beauty of these images. “Refined” is an epithet that comes to mind and if that suggests a certain taciturn feel to the music, it is not entirely untrue. However, it is very much the music of adventure – the kind that comes from distant concentration and energy that derives from musicians feeling, rather than reading their way forward. It is the association with instruments and players in fresh contexts; mashing up the permutations and altering the perspective between foreground (solo) and background (ensemble), and of the shifting spatial architecture of the music itself.

Dino Massa has composed most of the charts on this disc. The music is redolent of tonal colours of the saxophone and its extraordinary relationship with the guitar on “Alone” for instance. Christopher Burnett’s “Notos” finds the alto saxophone sweetly intoned by Burnett over husky flugelhorns intoning, in their turn, in a husky, distantly Latin arrangement that is both mesmerising and sensuous as well. The two flutes written into “Tarantella” are one of the most alluring aspects of this crepuscular, brooding piece, placed strategically at the end of the recording. This wonderfully teasing and flirtatious melody is a perfect way to leave the air that rushes in to fill the void of silence at the music’s end with great expectation of what might come next from an association that includes Dino Massa and Christopher Burnett as well as any and all of the others on t his disc.