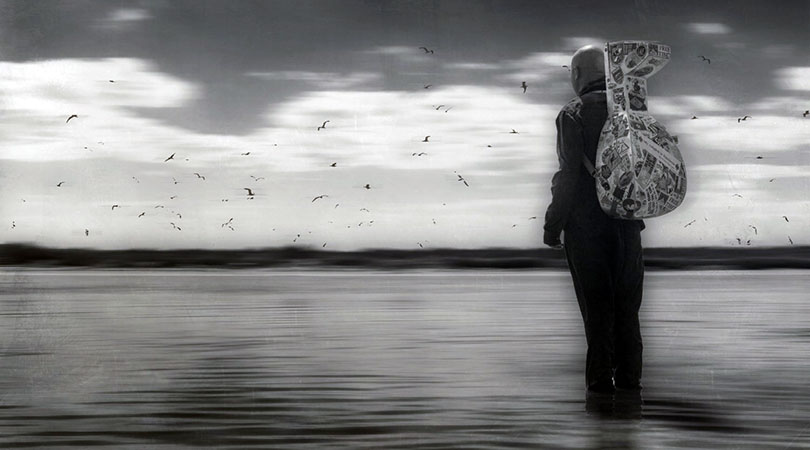 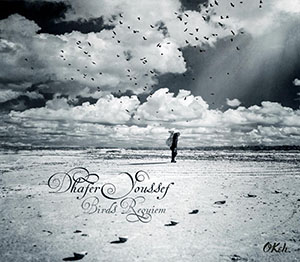 It is rare indeed for the oud player—the player of that Middle Eastern and Mediterranean lute—to venture out of the traditional context. Players like Rabih Abou-Khalil have done so, somewhat marginally, while Gordon Grdina, the Canadian player was bold and masterful. But there is no player quite like Dhafer Youssef, a Tunisian-born, Europe-based master musician, who is not only traditional, but also forward looking; who, moreover, combines his wonderful voice with its absolutely magical range, all to make spectral and absolutely mystical music. His hypnotic album, a suite called Birds Requiem is a true masterpiece. The music for the album was conceived as a soundtrack for an imaginary film. As it turns out the visuals of the film play out in the majestic music that traces the separation of the body and the soul as it follows the wanderings—at times melancholic and at times ecstatic—of both entities. Whichever part of the being is being shadowed and celebrated, the music is always visceral, fascinating and utterly original, and which can never be listened to only one. Such is the mesmerism of Mr. Youssef’s voice, his playing and the playing of the ensemble that makes the music with Mr. Youssef.

The group is so in tune with the music that it is almost possible to mistake them for a band of wandering North Africans; a part of an invisible caravanserai wending its way through the harsh topography of the Sahara. But these are musician as far removed as Turkey is from Northern Europe. Firstly there are two voices: the one sung by Dhafer Youssef, accompanied of course by the oud. The other voice is that of the clarinet, voiced by the Turk, Hüsnü Senlendirici. These two players voice the wandering body and the spirit-leaden soul. There is no telling which one is which entity, but it becomes clear from the music that Mr. Youssef’s is the voice of the soul and the deeper, more woody one of the clarinet is that of the body. Their conversations are riveting and can be heard on most of the four parts of the suite, but a listen to “Ascetic Mood” will be enough to be captivated. This chart is one of the six pieces of incidental music that links the four movements of the Birds Requiem Suite.

Other musicians who play invaluable roles in the Suite are Nils Petter-Molvaer, whose haunting open-belled trumpet chases the shadow of the clarinet as it wanders like a medieval apothecary ministering to the soul every time it returns to touch base with the body. Eivind Aarset, an electric guitarist of considerable repute is another musician who captures the imagination both by his sensitive guitar-playing as well as his handling of the gorgeously manipulated electronics. Bassist Phil Donkin is superb, especially on “Fuga Hirundinum ‘Birds Requiem’ Suite” as are pianist Kristjan Randulu, kanun-player Ayteç Dogan, whose instrument resembles a zither and the drummer, Chander Sardjoe. But ultimately the proverbial spotlight is on Dhafer Youssef, who manipulates his voice to range from a depth-defying baritone to the giddying heights of a falsetto; all the while he is pitch-perfect even as he negotiates the ever- minutest quarter-tones. He paints as he sings and plays from an enchanted palette so that the listener never knows where the musical colours, shades and hues will come from next.

This is one of those absolutely exquisite albums that will astound critics and listeners who are bold enough to move well out of a comfort-zone. It blurs the artificial boundaries created by marketers into a realm so beautiful and rarefied, that a listener might never want to come back from where the music goes.

A small seaside town in Tunisia in the 1970s. A boy walks along a deserted shoreline picking up the odds and ends he finds lying around: A broken fishing net; a few discarded sardine cans; spokes from an old bicycle. His heart and mind are full of music and he wants to play. It’s as much as his father can do to put food on the table for Dhafer and his seven brothers and sisters. There certainly isn’t spare money for music lessons, let alone for an instrument. So Dhafer makes his own oud, the traditional middle-Eastern lute, using whatever he can find. You’ve only got to listen to the achingly beautiful first minute or so of Dhafer Youssef’s last album Digital Prophecy to hear how the passion for music, born in that small Tunisian town, still lives on.

The young Dhafer did what was expected of him and sang, having learnt at the traditional Koran school, but at the same time, he was hearing music on the radio – the only source of entertainment in this small town. “It was just music. That’s all I knew” says Dhafer “I didn’t know what was classical what was jazz and so on. Just music…” And so, on his homemade oud, Dhafer taught himself to play by ear.

One day a friend came back from his travels with an electric guitar and a small toy one for his young nephew. Dhafer borrowed the toy for a week, at the same time secretly yearning to get his hands on the proper instrument. Eventually his friend began to lend it to him for a few days at a time: “days when I didn’t sleep, the time was too precious. I just played.” As he began to earn money by singing at weddings, he saved enough to buy his first ‘real’ oud for the equivalent of 100 Euros. This was frowned on by friends and family. “God’s given you a voice, you’ve got to sing.”

But Dhafer had fallen in love with the sound of the instrument. It was the sound of his roots, the country where he was born. “If I’d been born in Africa I’d have been a drummer. In New York- a sax player. But I was born in Tunisia -I play the oud. If I’d been brought up near a piano maybe I’d have played that, but actually I didn’t even see my first piano until I went to Vienna when I was 19.” Vienna lured him with the promise of the opportunity to study music. “I did anything I could to earn money. I washed dishes, cleaned windows, worked as an Italian waiter even though I wasn’t Italian. I did anything I could just to keep the music going. But I still couldn’t read music. I went to listen to lots of music: jazz, classical, anything. And I met a viola player Tony Burger who patiently helped me to write my music down, and we would just play together for hours. Then I met the tabla player Jatinder Thakur who really got me into Indian music. This was a BIG discovery. I fell in love with the sound. It seemed so near to my soul, and I played with him every day. He was at the heart of the first quartet I played with.”

“In Vienna, I was still working to survive. But, I have to say, it was the most beautiful time of my life. It was a dream coming true: I was doing my own music, bringing alive the colours in my soul, playing a lot of theater music with people like accordionist Otto Lechner.” “Then along came an amazing opportunity. The Jazz club Porgy and Bess in Vienna would give a musician carte blanche to do what they liked, one night a month for the next twelve months. A new project every month. I could invite anyone I wanted to play with me so I just thought: ‘why not?’ and asked so many people I admired from all over the world: Iva Bittova, Peter Herbert, Renaud Garcia Fons and Christian Muthspiel for example.”

“It was a huge success and I got to do in nine months what might have taken ten years. I was doing something completely different each month and at every gig, people would come up and ask about the music. Sometimes, things went so well with the musicians that one night at the Porgy and Bess wasn’t enough and we’d go into the studio to record. That’s how my first album, Malak came about.”

“Well, after that, I thought I would go back to Africa in search of my roots, but after a while, I felt that Europe was where my home was. My creativity is in Europe and wherever that is, there is my home. Enja wanted another recording from me and I went to New York for a while and recorded Electric Sufi with a group which included Dieter Ilg, Markus Stockhausen and Doug Wimbish.”

The world was beginning to take notice of Dhafer’s captivating high vocals and intensity of playing and he considered settling in New York. “But then came September 11th and I just thought in this troubled world I should return to Paris.” “I began to have more and more contact with Norway and Nils Petter Molvaer invited me to play with him and the singer Anneli Drecker.” This lead eventually to his third album, Digital Prophecy. Here, Dhafer’s profoundly spiritual singing and playing become embedded in the Scandinavian, existentialist world of Norwegian music, embodied in the playing of Eivind Aarset on guitar, drummer Rune Arnesen, Bugge Wesseltoft on keyboards and Dieter Ilg on bass, along with the sampling of Jan Bang. “I just love playing with musicians from the North. They are more African than some Africans and they are an inspiration to me.”

Dhafer’s band consists of the cream of Norway’s electronic nu-jazz scene. Eivind Aarset, one of the finest guitarists in the world today, is renowned for the ambient washes and eastern flavoured drones that have featured on the work of Nils Petter Molvaer, Kjetil Bjornstad and for his own band, Electronique Noire. Drummer Rune Arnesen’s urgent beats also feature in Molvaer’s work and add a distinctive, contemporary drum’n’bass sensibility ably teamed with the highly in-demand depth charges of bassist Audun Erlien. The line-up is completed by trumpeter Arve Henriksen recipient of one of Norway’s Jazz launch Europe awards whose unique style of trumpet playing and vocals is confounding audiences and fellow musicians alike.
“I am the only one who doesn’t speak Norwegian!” says Dhafer, “but our gigs together are not about what happens for an hour on stage. These are simply great human beings, and how we are as musicians comes as much from the time we spend hanging around: waiting at airports, traveling together, being on the road, in a bus, sharing good food.”