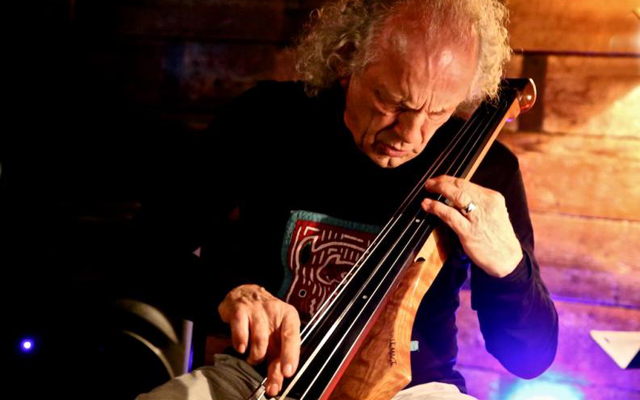 One of the most significant musical advantages of the Hemage bass that is played by David Friesen is that its inner architecture enables him to extract an enormous palette of colours that appear to meld those of a contrabass and an electric bass guitar. The result is a seemingly dramatic increase in registers – he can reach higher registers and challenging lows while the bass still produces a faux-acoustic sound. This might also be a function of a superior electronics such as pick-up and live consoles. And while this endeavour might sound like a complex feat of engineering it is anything but that. In fact, Mr Friesen is first and foremost a superb musician who just happens to have taken bass playing along a road less travelled; one where his once-contrabass has morphed into a leaner-looking animal with a leaner musical sinew, rhythmic ferocity and harmonic bite. 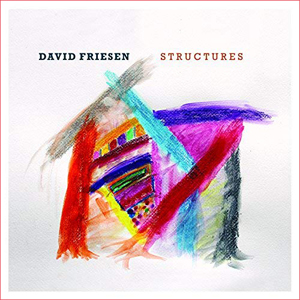 The title of this album is Structures and while that might seem to lay out a case for the mathematical; the geometric and therefore sharply angled rather than the musical with softer edges, in reality it is anything but that. Not only is it evident from the titles on each of the discs that Mr Friesen is attempting to paint pictures and create narratives of stories and paradigms but more than anything the music itself is extraordinarily songful. In other words, the so-called Structures have been designed and measured not with set squares and rulers but with delicate French curves so to speak. Mr Friesen also explores two vastly different sets of harmonic possibilities as his instrument is pitted against two backdrops: the onrushing air of Joe Manis’ woodwinds and the strings of Larry Koonse’s guitar.

The resultant effects are quite dramatic. But first, there are a few facets of this music common to both duos. Mr Friesen shows a great penchant for wit and humour; which although his music is given to theatrical techniques, devices and gestures such as shock and other gentler emotions it is not the kind associated with what Italians once called opera buffa. Still the music is dramatic enough to suggest the “operatic” but without words, of course and there is ample evidence of this in the wailing and keening of “Left Field Blues” and “Lament for the Loss/Procession”. The profound nature of much of the music – especially when Mr Friesen switches on Disc One from his bass to the piano – suggests Mr Friesen is given to meditation and to exploring aspects of sound – colours, and tone textures – that might be used to effectively communicate a spiritual side to his life as a composer. Mr Manis joins him in this pursuit to sublime effect with his rolling and undulating phrases of repeated notes and ascending figures on “Going Forth”.

Quite miraculously throughout Disc One, Mr Friesen is able to play almost completely pizzicato (at least until “Lament for the Loss/Procession) and sustain his profundity. The first perceptible playing con arco comes on that track, and the effects are dramatised further by using electronic delays, overlapping bass lines and high-pitched bowed effects. Mr Friesen is clearly a player who can give the impression of caressing the bass strings even while plucking them. This challenge is carried forward onto Disc Two, where the manipulation of his instrument becomes infinitely more subtle when it must be played alongside (another stringed one) Larry Koonse’s guitar. The musical narratives and sketches on Disc Two suggests an abstract impressionistic exploration and Mr Koonse’s soft, multi-hued and angular harmonics have the rather splendid effect of a brush laden with a myriad colours being applied the overall musical canvas, which is quite magical.

By the end of it all one gets a sense that Mr Friesen continues to carve and refine a singular niche for himself, with his eclectic mix of acoustic and electronic elements, revisiting each when his music takes him to them, often interweaving the threads of each into a fabulous musical fabric with rippling and sometimes a broodingly percussive tumbling grooves upon which foundation he creates a unique sonic architecture.