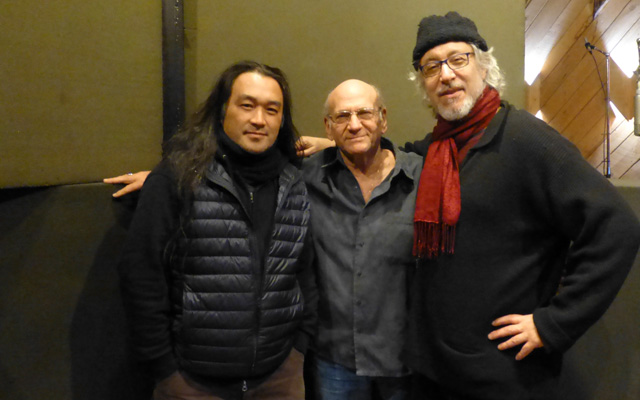 This recording is yet more proof of that which we learned from Beethoven: “Don’t only practice your art,” he told us, “But force your way into its secrets, for it and knowledge can raise men to the Divine”. And so, approaching The Unknowable (the quest and the music) one must arrive be cognizant of the possibility of never arriving at that proverbial Holy Grail, but as this musical excursion attests, a musical nirvana of sorts is entirely within the realm of possibility. That latter statement almost becomes an aphorism when you consider that the musicians undertaking this expedition are none other than the venerable Dave Liebman, Adam Rudolph and Tatsuya Nakatami. 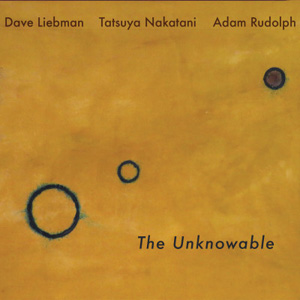 Naturally a search for something so evanescent, even nebulous can only come with something as inherently evanescent and, indeed, nebulous as “spontaneous improvisation”, to use a term that Mr. Rudolph favours in the notes accompanying the music. It is a term, no doubt, that Mr. Nakatami also shares. As far as Mr. Liebman is concerned, because “he lives it, he breathes it” and his music may also be likened to living breath that moves like ether within this music. Such hyperbole is wholly appropriate when discussing Mr. Liebman and his music. His every musical utterance suggests that has descended directly from John Coltrane and Albert Ayler. His ululations that accompany Mr. Rudolph’s hypnotic line on “The Turning” are a (late) example of this; phrases are dazzling asides that pierce the music’s mindstream like bolts of pure sunshine. Here, as elsewhere throughout this stream-of-consciousness suite, Mr. Liebman shows (yet again) why, like Pharoah Sanders and Wayne Shorter, he is the only other spiritualist alive.

Mr. Rudolph, for his part, has long been roaming both the inner quintessence and the outer-reaches of musical ether. As a result his repertoire – both through-composed and (as here), improvised, is so elementally pure and viscerally energetic that notes and pulses radiate from it like exploding coronas emerging from the nuclear furnace of the sun. His performance throughout this extraordinary disc suggests that in his percussion colouring one senses the very heartbeat of pure music. The power of his rhythmic spine is fortified by the presence of Tatsuya Nakatami, whose rhythmic strokes are both quintessentially silken and Japanese, as well as deeply universal coded messages that bounce off solar and lunar landscapes suggesting that he has travelled albeit astral-like, to places in the void where others of his kind would be afraid to roam.

In a meeting of such musical minds there is a natural tendency towards both sound and silence, as paths are suggested, explored and ventured into newly discovered portals, through which the musicians enter brave new worlds with absolute fearlessness. And so notes may dally, phrases unfold interminably, the shrill, keening howl of the saxophone and flute may swell in amid the rumbling gravitas of the myriad drums, but even in such stark stillness no silence exists that is not pregnant with sound. Rhythm is present in all places, yet not attached anywhere. As all the musicians enact a dialectic between emptiness and structure, the latter (formless) structure keeps opening us to the moment, which accepts whatever, even the myriad moments of ecstasy we sense a resolution in The Unknowable.